The portable shrine that Moses built in the wilderness was stationed at Shiloh from the time of the Conquest until the city’s apparent destruction by the Philistines in 1104 BC. 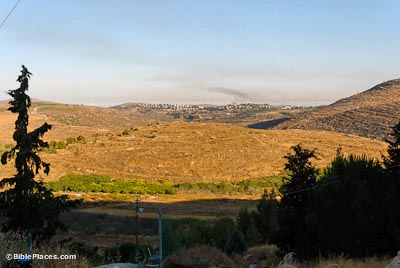 Excavations at the site have found significant remains from the Middle Bronze, Late Bronze, and Iron I.

In the time before the Israelites, the city was strongly fortified with a massive wall and glacis.  After the Israelites settled here, the site was unfortified; Iron Age residences were found built into the earlier fortifications. 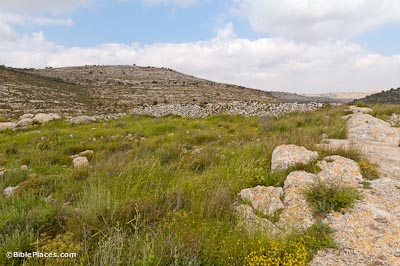 Wilson identified a “sort of level court” in 1873, 400 feet (120 m) long and 77 feet (24 m) wide, much bigger than any other level spot on the summit.  “There is no other level space sufficiently large to receive a tent of the dimensions of the Tabernacle.” 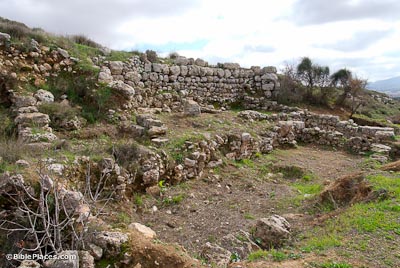 Houses from Time of Samuel

The best-preserved Iron Age structures were those built in Area C into the Middle Bronze glacis.  The pottery found in these buildings is the richest discovered in any early Israelite site.  The Danish expedition found 10 whole vessels; the Israeli expedition found 30 additional vessels and large pieces of many more.  The most significant part of this collection is the collar rim store jars which characterize early Israelite settlements in the Hill Country.

Tel Shilo (Jewish Virtual Library) Communicates the importance of the site as a resting place for the tabernacle. It also highlights important archaeological discoveries, including pictures of mosaic floors found.

Shiloh: The Place Where the Tabernacle Stood (Leen Ritmeyer) A very nice 2019 article from Ritmeyer, including multiple photos and new reconstructions. Excellent for visualizing the site well.

Tel Shiloh Excavations (Land of the Bible) This site provides an overview of Shiloh.


Shiloh (ChristianAnswers.net) Briefly describes the origin of the word, in addition to the basic biblical facts about the site.

Shiloh Excavation (Associates for Biblical Research) The official excavation website for Shiloh, including their self-produced TV program, photos, videos, and information on how to join the excavation.

Tel Shiloh (Shalom Israel Tours) Another overview of the site of Shiloh.

How Shilo Came to Be (Shilo, Jewish Community in the Land of Israel) A brief description of historic Shilo by the modern community living in the region. Includes links to information about Shilo today, the people of Shilo, housing, photos, etc.