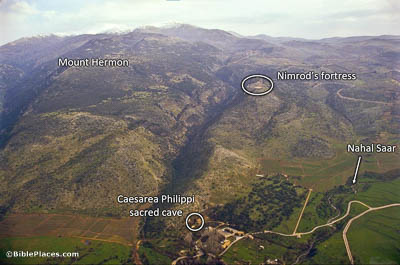 Situated 25 miles (40 km) north of the Sea of Galilee and at the base of Mt. Hermon, Caesarea Philippi is the location of one of the largest springs feeding the Jordan River. This abundant water supply has made the area very fertile and attractive for religious worship. Numerous temples were built in this city in the Hellenistic and Roman periods. 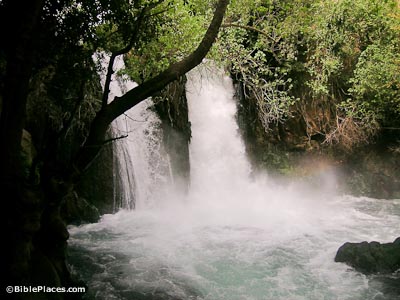 The Banias waterfall is less than 30 feet (10 m) high and is divided into two streams by a tree growing at the top. Prior to 1967, Banias was located in Syrian territory, not far from the border with Israel. At one point, Syria attempted to prevent these waters from flowing into Israel and the Jordan River. 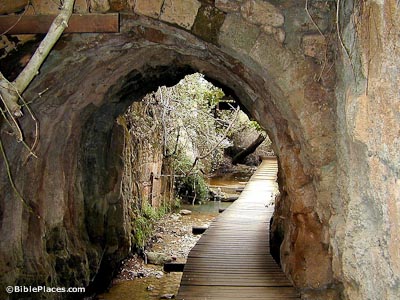 Apparently known as Baal Hermon and Baal Gad in the Old Testament period, this site later was named Panias after the Greek god Pan who was worshiped here. There is no record of Jesus entering the city, but the great confession and the transfiguration both occurred in the vicinity of the city (Matt 16:13), then known as Caesarea Philippi. 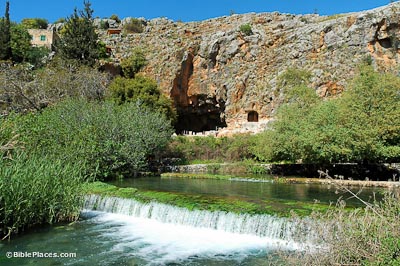 The spring emerged from the large cave which became the center of pagan worship. Beginning in the 3rd century BC, sacrifices were cast into the cave as offerings to the god Pan. Pan, the half-man half-goat god of fright (thus “panic”), is often depicted playing the flute. The city’s modern name, Banias, is the Arabic form of Panias. 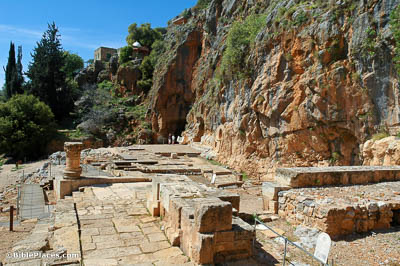 In the Hellenistic period, this city was resettled. An open-air sanctuary was built for Pan next to the source of water that exited the cave. Augustus Caesar later gave this city to Herod the Great, who in turn built a marble temple to Augustus. 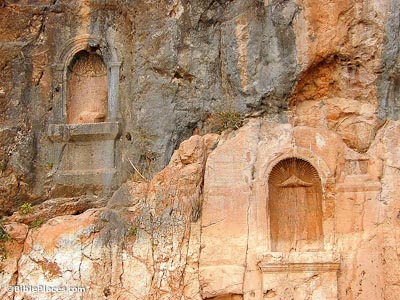 Adjacent to the sacred cave is a rocky escarpment with a series of hewn niches. It is known that statues of the deity were placed in these niches by depictions on coins of the city. One niche housed a sculpture of Echo, the mountain nymph and Pan’s consort. Another niche housed a statue of Pan’s father, Hermes, son of nymph Maia. Inscriptions in the niches mention those who gave large donations.

See our page on Matthew 17 for a couple reasons why Jesus’s Transfiguration may have occurred on Mount Hermon near Caesarea Philippi.

Banias (Jewish Virtual Library) An article detailing both the ancient history of the site and some of the modern excavation and archaeological history.

Caesarea Philippi (Land of the Bible) A good explanation of the pagan worship at the site, and the biblical events associated with Caesarea Philippi as well. Includes quotes from Josephus and Mark Twain.

The ancient Caesarea Philippi (Christian Media Center) An article highlighting the time Jesus spent at the site. It is accompanied by a five-minute video that gives a brief tour, history of the battle fought there in AD 200, and further religious information.

Banyas (The Israeli Mosaic) Contains informative sections on history, the Hermon River, sites at Banyas Reserve, and getting there. Links throughout the history section allow for in-depth study.

Ancient Caesarea Philippi (Bible History) This site features an extensive article on the history of Banias, including a reconstruction painting of the temples there during the Greek era. Also includes articles from several Bible commentaries about Caesarea Philippi.

Banyas: Cult Center of the God Pan (Israel MFA) Gives a detailed history of the site and descriptions of several of the important archaeological features relating to cult practices in the area.

Caesarea Philippi (Into His Own) A brief, encyclopedia-type article with links to related words and topics for further study.

Paneas Caesarea Philippi and the World of the Gospels (PDF article) A 19-page paper written in 2014 by John F. Wilson specifically regarding how archaeological findings at Banias relate to the gospels; includes an extensive bibliography.

Caesarea Philippi (Bible Odyssey) Special sections dedicated to the gods worshiped at the site and recent archaeological excavations there make this article worth a read.