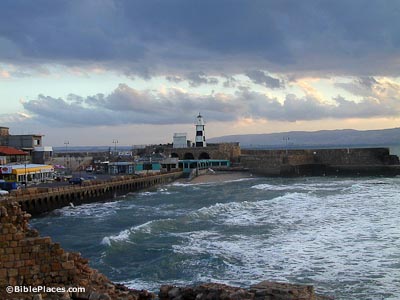 Acco is only referenced once in the Bible by this name. In Judges 1:31, it is referred to as one of the places the Israelites failed to hold. In the New Testament, Acco was known as Ptolemais and was one of the stops on Paul’s final return to Jerusalem (Acts 21:7). Ptolemais was situated on the main sea and land route in ancient times.  It served as the main port of the region until Caesarea was built. Herod the Great received Augustus Caesar at this site since Caesarea had not yet been completed. Vespasian first docked at Ptolemais when he came to subdue the First Jewish Revolt. Later, the Arab inhabitants changed the name back to “Acco.” 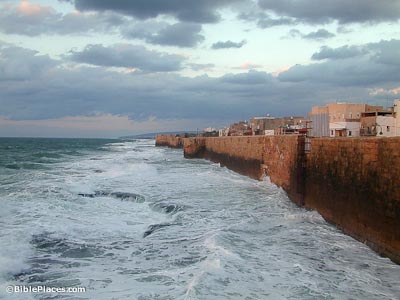 Acco (then known as Acre) was conquered by the Crusaders in AD 1104. They held Acco even after having lost control of Jerusalem in 1187. It then became the greatest port of their empire. The Mamluks ended Crusader rule in Acco in 1291. Napoleon understood the strategic value of this site. He claimed that if this port city had fallen to him, “the world would have been mine.” His 1799 siege failed. 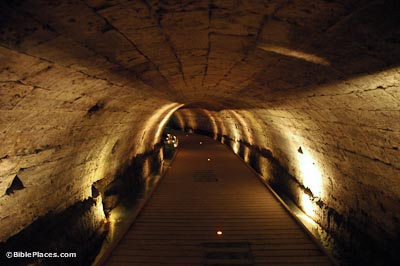 Five hundred years after the Crusaders left, the Druze prince Fakhr ad-Din rebuilt the city. The Muslims could not destroy the Crusader’s underground labyrinth, so it can still be visited today. These buildings were originally above-ground, but Al-Jazzar simply built his city over them. The excavations were stopped for fear that the Arab town might collapse. Today, most of the Crusader city is still buried. Only the area that is originally known as the “Hospitaller’s Quarter” is open. 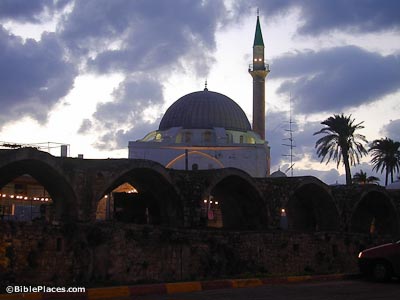 The emerald-domed, 18th-century Mosque of Al-Jazzar is the third largest mosque in Israel. Construction began in 1781, on the site of San Croce, the original Christian cathedral of Acco.
The Roman columns inside were taken from Caesarea. Inside the mosque is a shrine containing a hair from the beard of Muhammad. Other hairs from Muhammad’s beard can be seen in Istanbul, Turkey.

See historical photos of Acco at Life in the Holy Land.

City of Acre (Bein Harim Tourism Services) Brief descriptions of the sites within the city of Acre, along with a nice photo from the Sea.

Akko- The Maritime Capital of the Crusader Kingdom (Israel MFA) Concentrates on the Crusader history and archaeological remains of the site.

Acre, Akko, or Acco? (Gems in Israel) Explains the history of the city, includes its association with a few biblical characters, and its Crusader and Ottoman background.

Archaeology in Israel – Acco (The Jewish Magazine) Explains in detail various aspects of the site and its history, particularly Napoleon’s failed siege and the Crusaders’ activities there.

Acre from the air (Wikimedia) An aerial image of the modern city of Acco.

Acre, Akko (Jewish Virtual Library) An overview of Acco’s history, including facts about the modern city.

Old Akko – History (Akko.com) A timeline, history about the name of the city, and modern travel tips.

Akko’s Total Archaeology Experience (Bible History Daily) This interview with Ann Killebrew commemorates her 10-year excavation anniversary at the site in 2019; she serves as one of the excavation directors.