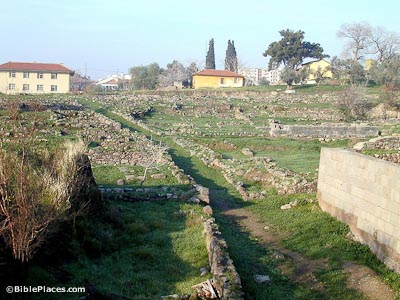 Smyrna was the second city to receive a letter from the apostle John in the book of Revelation. Acts 19:10 suggests that the church there was founded during Paul’s third missionary journey. Due to the fact that the port city of Izmir houses the second largest population in Turkey today, the site of ancient Smyrna has been little excavated. Excepting the agora, theater, and sections of the Roman aqueduct, little remains of the ancient city. 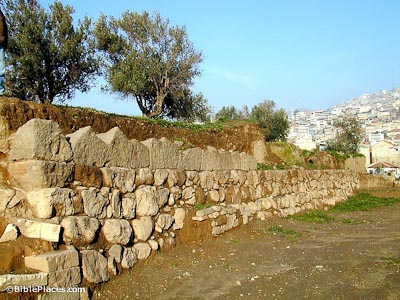 Smyrna sat 35 miles (56 km) north of Ephesus, built near the ruins of an ancient Greek colony destroyed in the 7th century BC. Lysimachus, one of Alexander the Great’s generals, rebuilt Smyrna as a new Hellenistic city in the 3rd century BC. The city was later established as a Roman commercial center with a port on the Aegean Sea. Scholars believe the city grew to about 100,000 by the time of the apostles Paul and John. 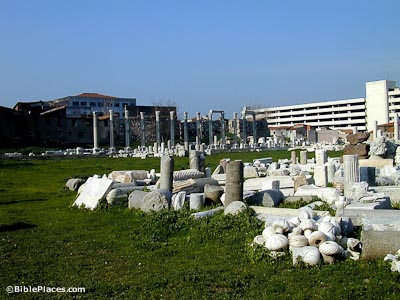 This 2nd century AD agora, midway between the acropolis and the harbor, was partially excavated by German and Turkish archaeologists from 1932–41. Porticoes lined the north and west sides of the agora, and an altar to Zeus sat in the center. 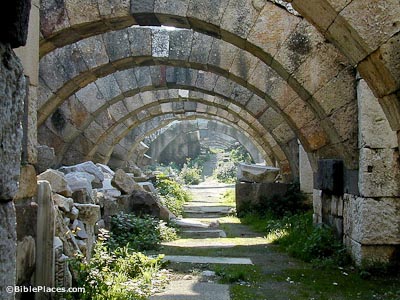 The letter in Revelation 2:8-11 is filled with the affection and joy that comes from triumph over hardship and persecution. The church faced strong Jewish opposition in Smyrna. There was a considerable number of Jews in the city from pre-New Testament times through the Ottoman period. Even today, various synagogues are located throughout the modern city. 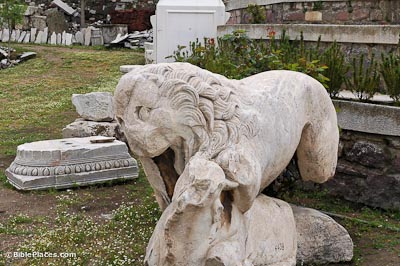 When John said that some will be thrown into prison, he knew that Roman imprisonment was frequently a prelude to execution. He encouraged the believers to be faithful even unto death. In this persecution, John’s own apprentice, Polycarp, was martyred here in AD 155. An example of John’s warning and exhortation, he refused to blaspheme the Lord’s name and was subsequently burned alive.

Ancient Smyrna (Drive Thru History). A brief exploration of the site’s history and a discussion of the letter to Smyrna in Revelation.

Smyrna (Pilgrim Tours). A collection of entries on Smyrna from various Bible dictionaries.

Izmir (All About Turkey). This page is most interesting for its information about Izmir’s more recent history. It also has many links to related pages.

Smyrna (Livius). An article with a timeline of the site and many interesting photos.

Izmir (Turizm.net). Describes the history and legends associated with Smyrna, accompanied by a few small pictures.

Izmir – Birth Place of Homer (Focus Multimedia). Offers a brief cultural and historical glance at the city where Homer is believed to have lived. Internal links direct the reader to articles on related subjects.

Turkey & Seven Churches of Revelation Photo Album (ArcImaging, Rex Weissler). Offers quite a few large pictures from a tour of Turkey. Go to “I” section (for Izmir) or click on the appropriate “tour” link at the top of the page.