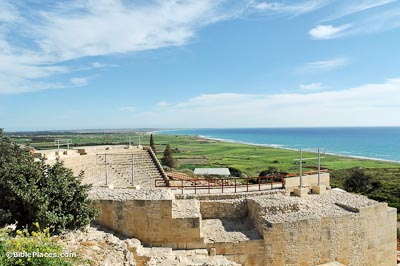 According to Herodotus, Kourion was founded by Argives in the Late Bronze Age and was named for Koureus, the son of Cinyras, the first king of Cyprus. There is evidence of Achaean settlement both during the Mycenaean expansion in the 13th century BC, and following the Dorian invasions in the 12th century BC. The Assyrian kings Sargon II and Esarhaddon mention Damasu, king of Kuri. Stasanor, king of Kourion, initially participated in an uprising against the Persians, but later switched sides and assisted Persia in regaining control of Cyprus. The last king of Kourion, Pasicrates, supported Alexander the Great against the Persians. 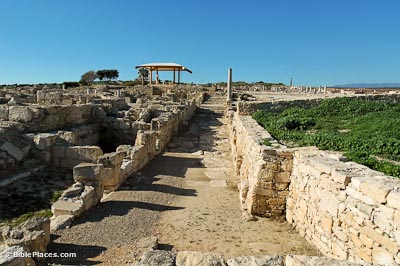 After Paul and Barnabas parted ways, John Mark and Barnabas returned to Cyprus (Acts 15:36-39). According to the apocryphal Acts of Barnabas, “[Barnabas and John Mark] came to Curium. And we found that a certain abominable race was being performed in the road near the city, where a multitude of women and men naked were performing the race. And there was great deception and error in that place. And Barnabas turning, rebuked it; and the western part fell, so that many were wounded, and many of them also died and the rest fled to the temple of Apollo, which was close at hand in the city, which was called sacred. And when we came near the temple, a great multitude of Jews who were there, having been put up to it by Barjesus, stood outside of the city, and did not allow us to go into the city; but we spent the evening under a tree near the city, and rested there.” 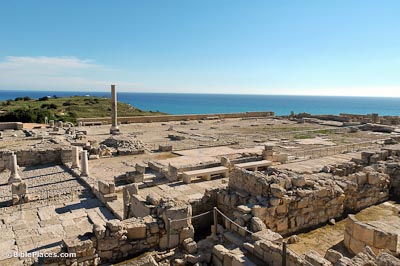 In the 5th century AD, a large Christian cathedral was built on the city’s acropolis. The main basilica had a single apse and three aisles. On one side was a smaller basilica with remains of a baptistery, and on another side was the bishop’s residence. The cathedral was destroyed during the Arab invasions of the 7th century, and many of the materials were taken to build a new church in the nearby village of Episkopi. A standing column is one of 24 original columns which divided the nave and the two aisles. The columns were made of granite, and the bases and capitals were of marble. 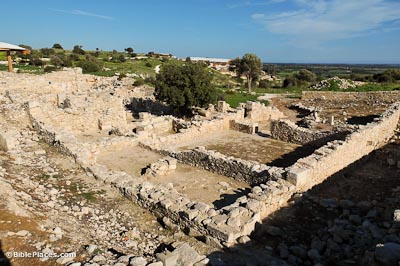 In the 4th century AD, Kourion was struck by a series of earthquakes, the most severe of which occurred on July 21, 365. Vivid evidence for this comes from a residence on the acropolis. Within the damaged building, the skeletons of nine people were excavated: seven adults, a young girl, and a baby. The skeletal remains indicate the people were crushed by falling stones and plaster. An 800-pound stone feeding trough was found in the courtyard, cracked in two by the earthquake, and tethered by an iron chain to the trough was the skeleton of a mule. The house was never rebuilt. 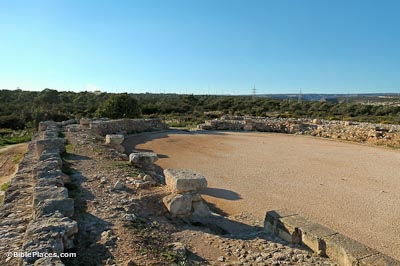 Below the acropolis to the west, a stadium was built in the 2nd century AD and remained in use until the end of the 4th century. Its seven rows of seats, which have been partially reconstructed, could accommodate 6,000 spectators. Three entrances were located in the stadium’s cavea. 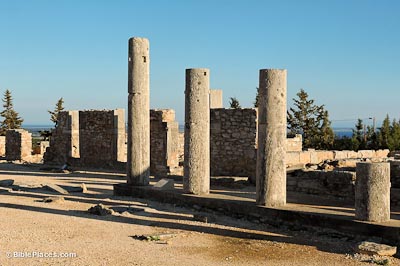 The Temple of Apollo Hylates is located just over a mile (1.8 km) west of the acropolis, on the road to Paphos. Here, Apollo was worshipped as god of the woodlands (hylates). Worshippers entered the sanctuary either by the Paphos Gate on the west or the Kourion Gate on the east. The earliest sanctuary dates to the 8th century BC, but its present form reflects alterations and rebuilding from the 1st century AD. It was destroyed in the earthquake of 365 AD.

Kourion Cyprus (The Princeton Encyclopedia of Classical Sites). A slightly longer introduction to important details about the site.

Kourion Archaeological Site (Exploring Cyprus). This page offers information about the various ancient structures, as well as many photos.

Kourion (Wilke D. Schram). An alternative overview of the archaeological site, also with many interesting pictures and illustrations.

History of Kourion (Penn Museum). This website has some great information about the excavations at Kourion, including a digital database of many artifacts that have been found there.

Ancient Kourion (British Museum). Another museum website with extensive information about Kourion and its artifacts.

Kourion: Temple of Apollo (Ring of Christ). A helpful description of the temple ruins. This same website also has a page on Kourion’s gladiators.

Kourion (Cyprus) Vacation Travel Video Guide (Expoza Travel). This video has some helpful information about the excavations, and the narrator is very easy to listen to.

Ancient Kourion From Air (Mpakis). Drone footage of the archaeological site and its surroundings.