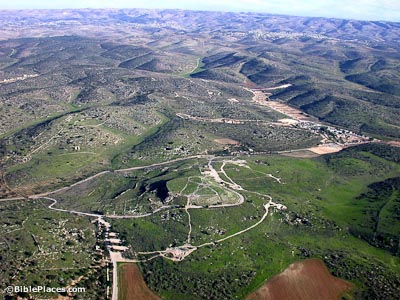 Pictured here is the Old Testament site of Maresha, a city of Judah given to the clan of Caleb (Josh 15:44). It was destroyed by Sennacherib in 701 BC and eventually became the capital city of the Idumeans. After destruction by the Parthians in 40 BC, the population center moved two miles (3.2 km) north to a place known as Beth Guvrin. Beth Guvrin had been a suburb of Maresha, but it became the major living center by the Roman Period. 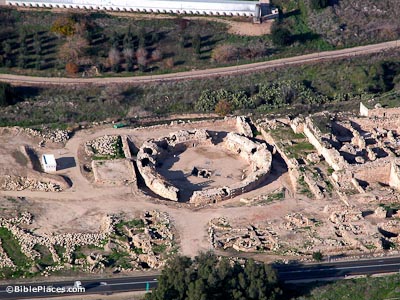 Beth Guvrin eventually became Eleutheropolis (“City of the Free”) in the Late Roman period (AD 200) when Emperor Septimus Severus turned it into a major administrative center. The amphitheater dates to this period and was used for animal and gladiator fights. One of the most obvious differences between amphitheaters and theaters is that an amphitheater makes an oval while a theater only makes a half-circle. 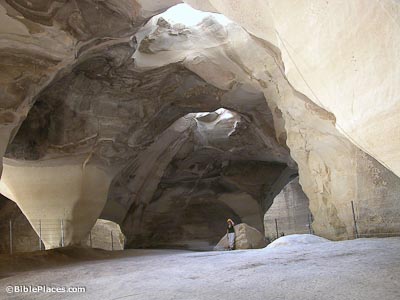 Eight hundred bell-shaped pits in the area are remains of ancient quarries, probably dating to the 4th–9th centuries AD. Because this stone was too soft to be used for building, people mined the stone to be burnt for lime and used it in mortar and plaster. The quarry was opened from a 3.5-foot (1-m) hole in the hard Nari surface above and then was widened out to create the mine. 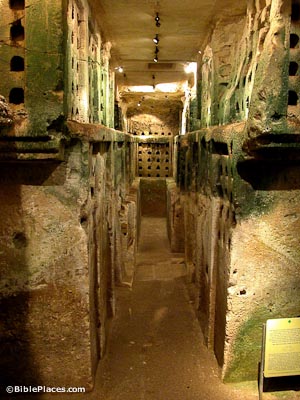 Pigeons were raised in antiquity for meat and for their dung, which was used as fertilizer. This large columbarium dates to about 200 BC and was shaped like a double-cross, nearly 100 feet (30 m) long. There were approximately 1,900 niches in this columbarium. 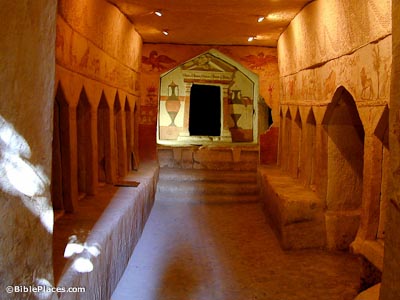 Sometime in the Hellenistic (or maybe Persian) period, a group of Sidonians settled at Maresha. This beautifully decorated tomb was used by Apollophanes, the head of the Sidonian settlement for 33 years. It was in use from the 3rd to the 1st centuries BC. The end of the cave is shaped like a bed and was the resting-place of the Sidonian patriarch. Numerous other burial niches were carved on either side of the chamber.

Beit Guvrin (Tourist Israel) An informative page about the site today, including tourist information on opening times and fees to enter.

Tel Maresha Caves Reveal Hellenistic Treasures (Bible History Daily) This 2018 article discusses the Greek and Roman historical remains found at the site, including a casserole dish of the Roman era.

Caves of Maresha and Bet-Guvrin in the Judean Lowlands (UNESCO official site) The official explanation of why and how this became a world heritage site.

Beit Guvrin Caves (Atlas Obscura) Written from a secular perspective, this page gives information and some photos, concentrating on the amazing underground sites.

Beit Guvrin (The Jewish Magazine) A good discussion of Bet Guvrin’s history and a detailed description of the caves.