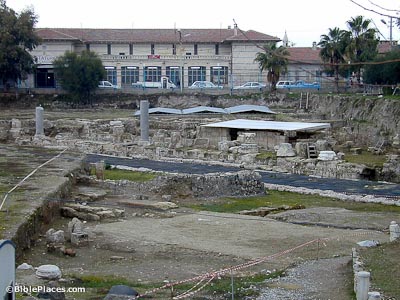 Little of Tarsus during the time of Paul has been excavated due to the location of the modern city of Cumhuriyet Alani atop the ruins. Excavations have turned up a paved city street of Tarsus along with a colonnaded podium, which may date to the 2nd century BC. In addition, remains have been found from the Bronze Age, baths, a Hellenistic portico, a Roman theater, and many terracotta figurines of deities, animals, people, and various mythological creatures. 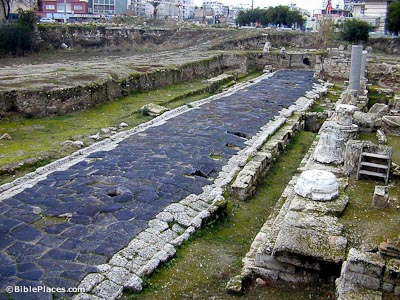 During this time of Pompey (67 BC), Tarsus was made the capital over the Roman province of Cilicia, and Jews began to receive Roman citizenship. Antony, who controlled the eastern provinces, declared the city free in 42 BC. Tarsus continued to receive special privileges under Augustus, who exempted the city from imperial taxation because Athenodorus, his teacher and friend, was a Tarsian. Tarsus grew into a cultural and intellectual center. Stoic philosophers like Athenodorus, Zeno, Antipater, and Nestor lived in the city in the 1st century AD. 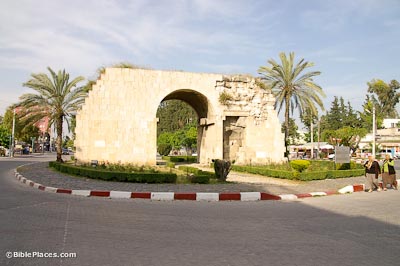 The Tarsus gate of Cleopatra, also called the “Sea Gate,” still stands today, though it has been significantly restored. It was believed that Cleopatra sailed up the Cydnus disguised as Aphrodite and came through this gate in 41 BC on her way to meet Mark Antony. 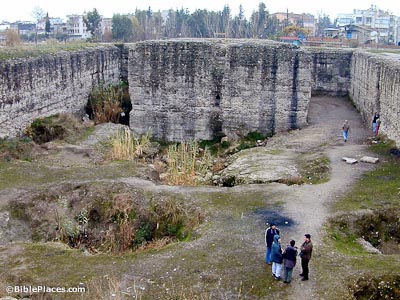 V. Longlois, a traveler during the Middle Ages, identified this structure as the tomb of Sardanapalus, an Assyrian who was killed during the siege of Nineveh in circa 612 BC. Located in Tekke, east of the medieval wall in Tarsus, this is actually a Roman temple dating to the 2nd century AD. 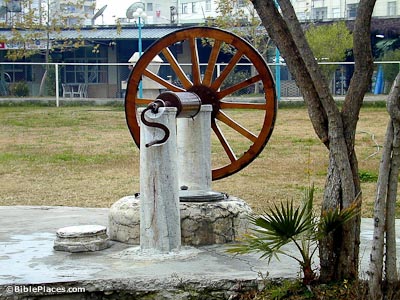 Tarsus was the hometown of the apostle Paul (Acts 9:11), a city of great importance (21:39) as a learning center of the ancient world, alongside Alexandria and Athens. Notably, Jewish citizens of Tarsus were granted Roman citizenship. As a child, Paul was raised in Jerusalem and properly educated under the tutelage of Gamaliel, a member of the Sanhedrin. Paul’s trade, tentmaking, fits well with Tarsus, a city well-known for making a certain type of felt cloth from the wool of shaggy black goats. Legend says that St. Paul often drank from this well, said to have special curative properties.

For another Bible chapter related to Tarsus, see Acts 11. For historical images illustrating Paul’s time in Damascus, see Life in the Holy Land.

Tarsus (NET Bible). A compilation of entries on Tarsus from several Bible dictionaries and encyclopedias.

Images of Tarsus, Turkey (University of Michigan). A series of old photographs taken during the Near East Expedition of Francis W. Kelsey in 1920. Includes a photo of Cleopatra’s Gate (apparently called St. Paul’s Gate at the time) and the Roman temple. A second part can be found here.

The Roman City of Tarsus in Cilicia and its Terracotta Figurines (Les Carnets de l’ ACoSt). A more technical discussion of certain finds from the site.