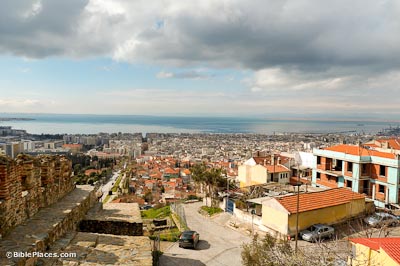 Thessalonica was located at the intersection of two major Roman roads, one leading from Italy eastward (Ignatia Way) and the other from the Danube to the Aegean. Thessalonica’s location and use as a port made it a prominent city. In 168 BC it became the capital of the second district of Macedonia and later it was made the capital and major port of the whole Roman province of Macedonia (146 BC). In 42 BC, after the battle at Philippi, Thessalonica was made a free city. Today the modern city of Thessaloniki is the second most important city of Greece and home to a million inhabitants. 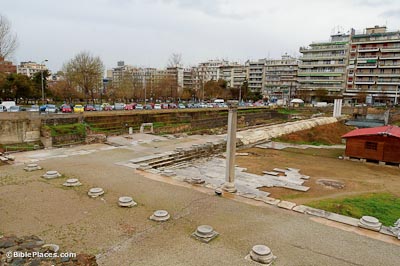 Very little has been uncovered at ancient Thessalonica because Thessaloniki sits atop the remains. The area pictured above and at right was formerly a bus station; when it was moved in 1962, this 1st or 2nd century AD forum was revealed. Excavators found a bathhouse and mint dating to the 1st century AD below pavement surrounding an odeum. An inscription (30 BC to AD 143) from the Vardar gate bears the word politarches, the word Luke used in reference to the officials of the city before whom Jason was brought by the mob (Acts 17:6). The word does not appear in any other Greek literature but does match the archaeology of the site. 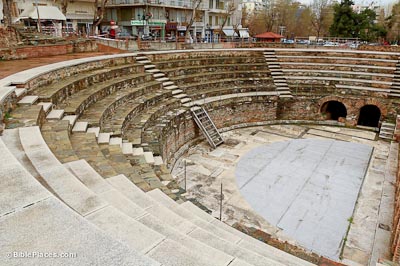 Paul (with Silas and Timothy) came to Thessalonica from Philippi on his second missionary journey, stopping in Amphipolis and Apollonia before arriving here (Acts 17). He preached in the city’s synagogue, the chief synagogue of the region, for at least three weeks. His ministry was strong, and he established a Jewish-Gentile church, although it was more heavily Gentile (1 Thess 1:9). When Paul faced great persecution at the hands of the mob, he fled to Berea, but Thessalonians eventually forced him to leave there also (Acts 17:13-14). 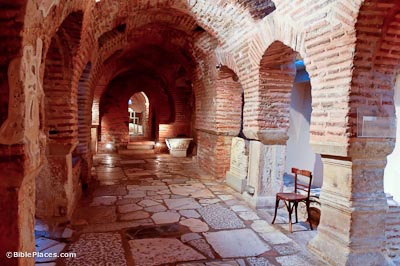 St. Demetrios was a native of Thessalonica whom Galarius put to death. This basilical church was first built in the 5th century AD and remembers St. Demetrios as the city’s patron saint. The largest church in Greece, this basilica was destroyed by fire in 1917 and has since been reconstructed. Beneath the church excavations have revealed remains from the Roman period including a bathhouse.

Thessalonica (Ancient History Encyclopedia). A good, though brief, introduction to the site.

Thessaloniki (Wikipedia). Detailed article about the modern city, including its history, landmarks, museums, and archaeological sites. Includes many links. There’s also a page dedicated to its history here.

Thessalonica (BibleStudyTools.com). A helpful encyclopedia entry about the city.

Thessalonica (Drive Thru History Adventures). This article offers a summary of Paul’s dealings with the city.

Thessaloniki Ancient Sites (Greeka.com). This page links to others with some information about the city’s major points of interest.

Thessalonica (Personal Webpage) A travel journal which provides some insights into the modern city and some facts about its history.

72 Hours in Thessaloniki (DiscoverGreece.com). This travel show promo offers some lovely footage of the city and its environs.