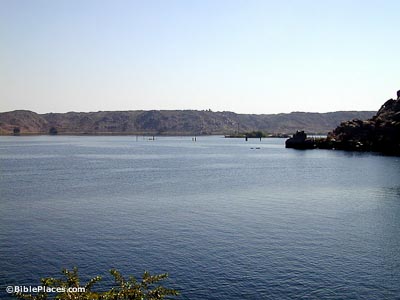 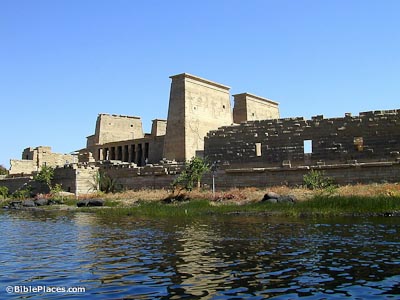 The earliest cultic structures at Philae date to the 25th Dynasty and the site became significant only in the Greco-Roman period. The temple was dedicated to the goddess Isis, particularly popular in the Roman era when pilgrims would travel to this temple from all over the Mediterranean world. The island flourished as a worship center until closed by Justinian in the 6th century AD. 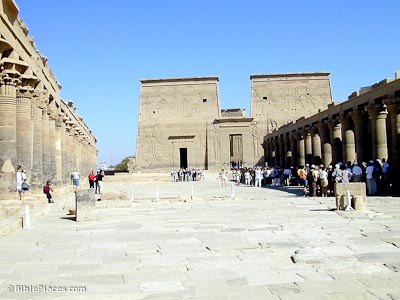 The western colonnade of the Philae Temple had 31 columns; the eastern colonnade was never completed. The first pylon (pictured on left) was constructed by Ptolemy XII. An additional entrance was built through the pylon on the left side for passage to the birth house. The second pylon (behind the first pylon; out of view) was built by Ptolemy VIII. The passage through this pylon leads into a hypostyle hall and the sanctuary of the Temple of Isis. 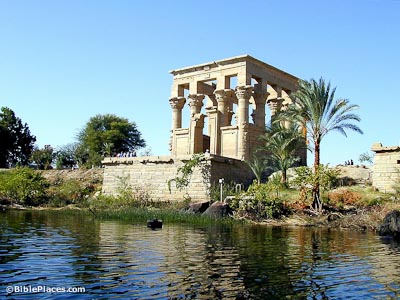 Known to the locals as “Pharaoh’s Bed,” the Kiosk of Trajan originally served as the main entrance into the temple from the river. The architraves are supported by 14 columns, but the wooden roof has not been preserved. Inside the Roman emperor Trajan is depicted making offerings to the Egyptian gods.

Trajan’s Kiosk – Pharaoh’s Bed (Tour Egypt). Briefly describes the Kiosk of Trajan, plus provides a couple of old images and a modern photo.

Philae Temple Complex (Tour Egypt). Provides a good introduction to the site and useful information about visiting. Has a few good pictures and some links to related topics and maps.

Philae Temple (Egyptian Monuments). Lengthy description of the site with some tips on visiting.

Exploring the Philae Temple Complex: A Visitor’s Guide (PlanetWare). This well-illustrated guide walks through the various points of interest in and around the complex.

Temple of Philae (personal website). Several high quality photos of the site, including a model of the temple.