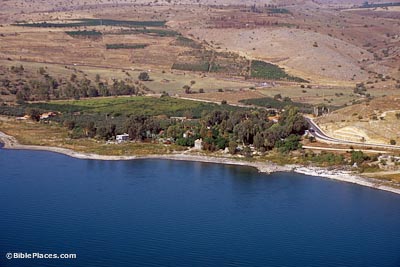 Two miles (3.2 km) west of Capernaum is what Josephus referred to as the “well of Capernaum.” Undoubtedly a popular fishing spot of the locals because of its famous “seven springs,” Heptapegon (today the name has been corrupted to Tabgha) is the traditional location for several episodes in Jesus’s ministry. 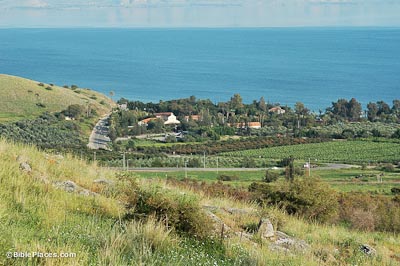 The seven springs that emerged at Tabgha (today only six have been discovered) produced water warmer than that of the Sea of Galilee. This warmer water helped the production of algae, which in turn attracted the fish. Fishermen thus have frequented this area for thousands of years.

Tabgha from Sea of Galilee

Tabgha is the traditional location for the calling of the disciples. It is believed that here Jesus walked along the shore and called out to Simon Peter and Andrew who were casting their nets into the lake. Walking along, Jesus saw two other brothers, James and John who were preparing their nets with their father Zebedee. Jesus called all of these men to follow Him. 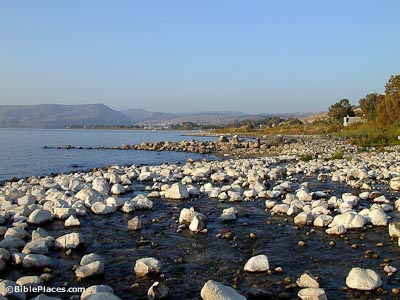 Evidence of ancient boating activity at Tabgha is found in the recently discovered harbor on the shore. Visible when the water level is -693.89 feet (-211.50 m) or lower, the curved western breakwater was 200 feet (60 m) long. Another 130 foot (40 m) breakwater ran perpendicular to the shore and protected the 100 foot (30 m) wide basin which was entered from the east. 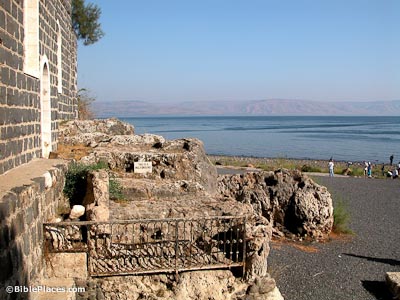 In John 21, Jesus met again with the disciples for the “last breakfast.” Here He restored Peter to himself after the disciple’s three denials by asking him three times if Peter loved Jesus. Catholic tradition associates this event with the naming of Peter as the singular leader of the church. The rock at left is the traditional place where Jesus stood and called out to the disciples.

This Byzantine mosaic is preserved under a modern church today, but it was once part of a church which commemorated Jesus’ feeding of the 5,000.

The Byzantine pilgrims were mistaken in locating this miracle here because Scripture says that it took place in a remote place by Bethsaida. The artist was apparently unacquainted with the fish in the lake as none have two dorsal fins.

See the related sites of Sea of Galilee, Bethsaida, Capernaum, Chorazin, Cove of the Sower, and the Mt. of Beatitudes. For Bible chapters related to Tabgha, see Mark 1. See also our historical pages, Capernaum and Fishing and Fishermen, at Life in the Holy Land.

The Complete Guide to Touring Tabgha (Sar-El). A helpful intro to the site, including its history, modern features, and biblical significance.

Tabgha (Israel MFA) Relates the history of the site with a focus on the many churches and chapels that have been built there.

Tabgha: Where Jesus Fed the 5,000 (Touchpoint Israel) Gives a nice feel for the site and the importance of it.

Tabgha (Israel in Photos) A personal blog tour through Tabgha, including visitor information coupled with historical background and photos.

Tabgha: Church of the Multiplication of the Loaves and the Fishes (Jewish Virtual Library) Gives an interesting and detailed history of the churches built on the site with several enlargeable photos of sections of the church’s famous mosaic floor.

A History of the Church of Loaves and Fishes: Burned Down Again (HaAretz) An article about the 2015 fire at the church, along with extensive historical information of prior structures on the site.

Tabgha (Heptapegon) (Ferrell Jenkins) Good introductory article to the fishing trade of Tabgha, along with information on the proximity to Capernaum and a nice aerial photo for reference.