Also known as the Kotel, Wailing Wall, Wailing-place of the Jews 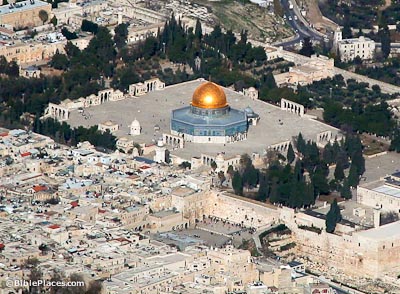 The Western Wall is the holiest place accessible to the Jewish people because of Muslim control of the Temple Mount. Known in recent centuries as the “Wailing Wall,” this was built by Herod the Great as the retaining wall of the Temple Mount complex. The plaza was created as an area for prayer when Israel captured the Old City in 1967. At times, tens of thousands of people gather here for prayer. 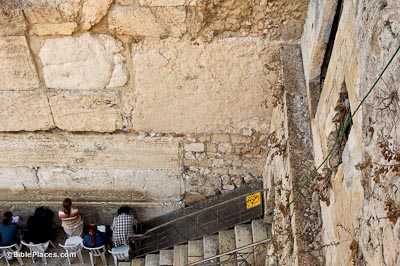 The massive lintel of this gate is preserved to the right of the bush and above the small fill stones behind the staircase. Once erroneously identified with Kipunus’s Gate (mentioned in the Mishnah), today it is known for the 19th-century explorer who discovered it. The original L-shaped passageway inside the gate is still preserved but not accessible. 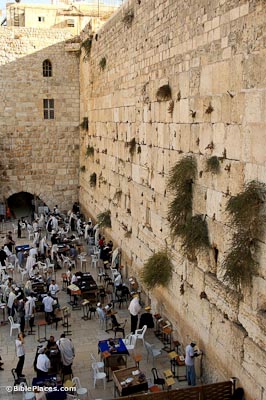 The holiest place in the world accessible to Jewish people, prayers are offered up at this wall built by King Herod in the first century BC.

Three times a day the Jewish people pray (morning, afternoon, evening) and they do so with phylacteries tied around their forehead and wrist, and with the white and blue prayer shawls. 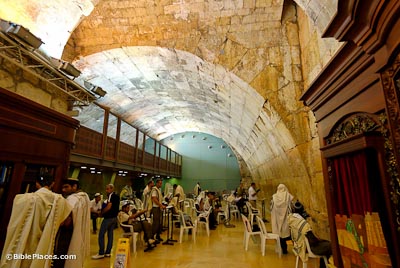 The men’s prayer area continues from the outdoor section through a passageway to the north. Within this area is a massive arch originally constructed by Herod and now known after a British explorer in the 1860s.

Though only 25 feet (8 m) high now, the arch originally was 75 feet (23 m) high when the Central Valley was much deeper. 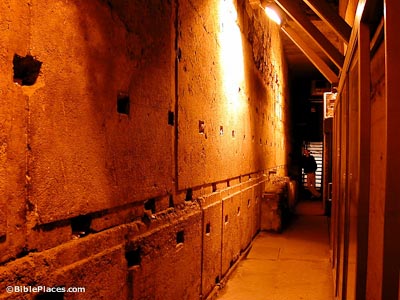 See historical images of the Western Wall from the 1800s and the 1960s at Life in the Holy Land.

The “Wailing Wall” in the 1800s (LifeintheHolyLand.com) A collection of drawings and photographs from the 19th century illustrating the Western Wall, along with explanatory notes by early explorers including Charles Wilson.

Wailing Wall to Western Wall – 1960s (LifeintheHolyLand.com) A collection of photographs of Charles Lee Feinberg with explanatory comments revealing a critical decade in the history of the holy place.

History & Overview of the Western Wall (Jewish Virtual Library) A complete history of the wall and some of the controversies that continue to surround it.

Western or Wailing Wall? (Jewish Virtual Library) Discusses the history of the wall’s name over the centuries.

Western Wall (Britannica) A simple encyclopedia article, good for gaining a basic understanding of the importance of the wall.

A Prayer at the Western Wall (Shema Yisrael) Provides a service to Jewish people around the world by receiving written prayers at a location in Jerusalem and placing them into a crack in the wall on behalf of the petitioner. Illustrates the Jewish belief that the wall is the “shortest route to G-d’s ear.”

The Western Wall (Virtual Israel Experience, JVL) Gives a highly readable description of the wall and a visit there.


Crumbling Stone in the Western Wall Exposes Jerusalem’s Religious Fractures (The Guardian) This 2018 article discusses some erosion on the wall, and how it illustrates the ongoing controversies in Jerusalem.

Jerusalem – The Western Wall and its Tunnels (Jewish Virtual Library) Gives the background of the Temple Mount, highlighting the Western Wall, both the section visible from the plaza and the length located in the adjoining tunnel.

Western Wall Tunnels – The Largest Stone (Jerusalem.com) A brief article, along with some basic information about the largest stone in the wall. The highlight is a 3-minute video, giving construction details and statistics.

Western Stone (Megalithic Builders) Another look at the biggest stone in the Temple Mount, again accompanied by a few videos.

Major General Sir Charles William Wilson (Palestine Exploration Fund) A biographical sketch of a British military man who did extensive archaeological work in Jerusalem, including the identification of the Herodian arch, located in the men’s prayer section, now named for him.