The site of et-Tell is a prominent ruin that is usually identified as biblical Ai. Archaeological excavations though have shown that et-Tell was inhabited from 3000–2400 BC and again after 1200 BC, but not during the time of Joshua’s Conquest (1400 BC). Resorting to a “late date” theory of the Conquest does not solve the problem.

Et-Tell is at the right center of the picture. The barren hill just below the top left is another suggested site of the city of Ai that Joshua destroyed (Khirbet el-Maqatir). Bethel is usually equated with Beitin (top right), but may better be located in modern el-Bireh (top left). Excavations to date do not give a conclusive answer. 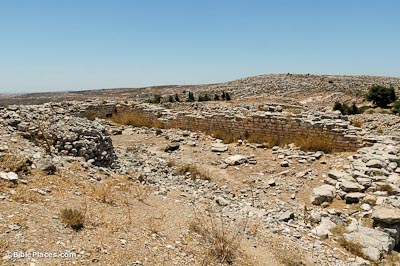 The city at et-Tell was very large (27 acres) and prominent in the Early Bronze period (3000–2300 BC). The summit of the tell is dominated by a large broad-house type building which is identified either as a temple or a palace. Four large stone pillar bases were found which supported the roof.

Special Report: The Excavation of et-Tell (Ai) in 1966 (PDF from Asbury Seminary) A seven-page essay from G. Herbert Livingston about the excavations and archaeology at et-Tell.

Biblical Ai (Et Tell) in Israel (Ancient Near East) Features links to several longer papers and further reading, along with a brief history of the site’s occupation and excerpts from several other pieces of literature.

The Archaeology of Ai (Mysteries of the Bible) Describes the archaeological dilemmas simplistically, although from a conservative perspective.

Is there evidence of the conquest at Ai? (BiblicalChronologist.org) Presents one way to get around the problem (shifting chronology 1000 years); not a good answer.

Ai (et-Tell) (PDF dictionary article) A dictionary entry from An Encyclopedia of the Bible and Its Reception, arguing only for et-Tell as the site of Ai.