Capital of the Roman province of Lusitania

Model of the Roman City

Emerita Augusta (also called Augusta Emerita) was founded in 25 BC by Augustus as a veteran settlement. Less than ten years later, it was made the capital of the Roman province of Lusitania. This province included much of the western part of the peninsula, in what is now Portugal. The city was situated at a crossing over the Guadiana River, and it served as the nexus of several roads leading to important cities, including Hispalis and Corduba. As a result, the city grew quickly, and it retained a powerful position in the region throughout the subsequent centuries. 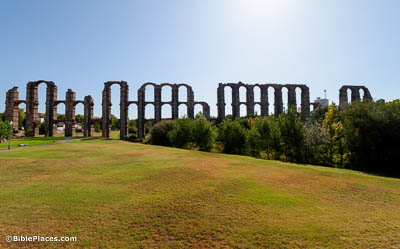 The Aqueduct of the Miracles

The city was served by three separate aqueducts, but the Acueducto de los Milagros (or Aqueduct of the Miracles) is by far the most impressive of them. The 38 standing pillars form a striking silhouette, especially since it is unusual to see the second or third stories preserved for several millennia. 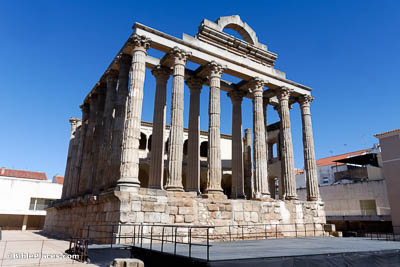 The "Temple of Diana"

Two forums have been discovered in Emerita Augusta—which is not too surprising, given that the city was quite large. They have not been exhaustively excavated due to the presence of modern buildings, but some structures have been uncovered, including the so-called temple of Diana. Despite its name, there is no reason for identifying this temple with Diana, and it may instead have been dedicated to the imperial cult. Either way, it was built in the late 1st century BC or early 1st century AD. 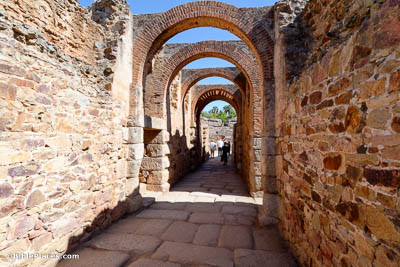 The Amphitheater's "Gate of Death"

Emerita Augusta had both a theater and an amphiteater. Shown here is the amphitheater’s “Gate of Death.” Though gladiator fights were not always fatal, the risk of death was very real. Besides that, animals were routinely brought into the amphitheater to be killed for entertainment. This explains the popular name “Gate of Death” for the gate where defeated men and animals would be taken after combat. 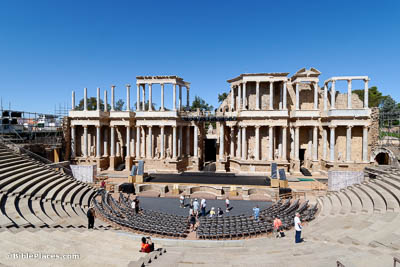 The theater at Emerita Augusta is one of the best-preserved examples in the world. The trouble with theaters is that they were regularly built with costly stones and other desirable materials; consequently, they became a prime target for looting once they fell out of use. This theater’s materials are no less valuable—but for whatever reason, many of its columns remained in situ for archaeologists to re-erect.

Emerita (Livius). A short introduction with captioned photos, as well as links to pages on individual structures at the site.

Archaeological Ensemble of Mérida (UNESCO). This page is perhaps most useful for its various maps and photos. UNESCO has also produced a brief video introduction to Emerita.

Augusta Emerita, Lusitania – Part I (Travel Blog). The first post of an eight-part series on Emerita and its features.

Augusta Emerita (When in Rome). A half-hour podcast episode on the topic of Emerita Augusta, with Dr. Daniel Osland from the University of Otago in Dunedin, New Zealand.