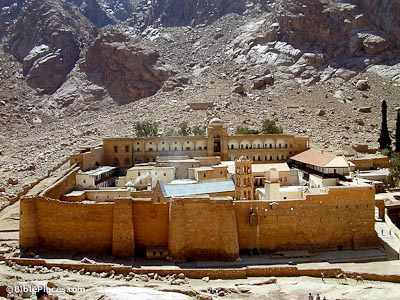 The monastery at the base of Jebel Musa preserves the tradition from the Byzantine period of identifying this as Mount Sinai. Named after a saint who was martyred in Egypt in AD 307, the monastery has a library with the second finest collection of manuscripts in the world (after the Vatican), including 3,500 manuscripts and 2,000 scrolls. Most of these are in Greek and were copied by the monks of this monastery. In 1844, the German scholar Friedrich von Tischendorf discovered Codex Sinaiticus here, one of the earliest copies of the Bible (4th century AD). 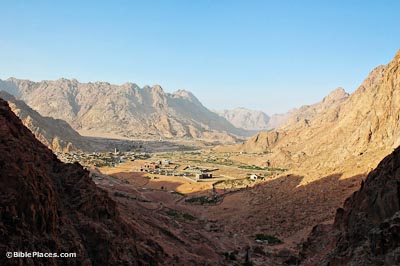 Wadi el-Deir connects Jebel Musa to the Plain of el-Raha. Raha means “rest” and according to tradition, this is the area where the Israelites camped and the golden calf was forged (Exod 32). Nearby are the tomb of Sheikh Harun (Aaron) and the chapel of the golden calf. 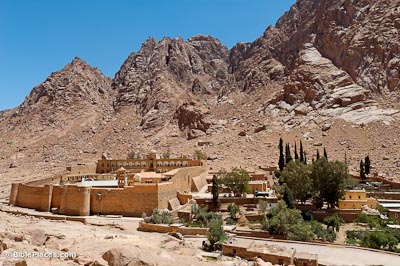 The monastery sits at an elevation of 5,150 feet (1,570 meters). The mountain of Jebel Musa rises to 7,498 feet in elevation (2,285 m). Jebel Musa is Arabic for “the mountain of Moses.” The mountain is ascended by 3,700 steps carved by a monk (known as the “steps of repentance”). The path leads past the “Spring of Moses” and a chapel dedicated to the Virgin Mary. Closer to the summit is the “Spring of Elijah” where the prophet is alleged to have hidden when running from Jezebel (1 Kgs 19). 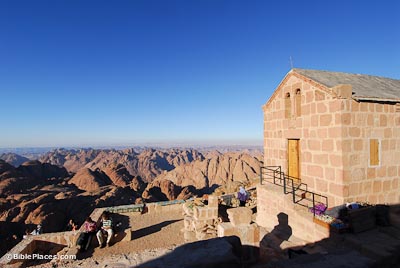 At the summit of Jebel Musa is the chapel to the Holy Trinity. This chapel was rebuilt in 1934 on the ruins of a 4th–5th century church. The interior of the chapel is decorated with frescoes from the life of Moses. Slightly to the west of the chapel is a small mosque built in the 12th century. Beneath this mosque is the traditional cave where Moses spent 40 days and where the Lord appeared to Elijah. 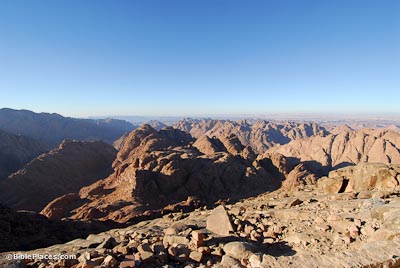 Scripture does not give a clear indication of the location of Mt. Sinai and for that reason, scholars differ widely over where it is to be located. The traditional location, Jebel Musa, is in southern Sinai, but some believe that this is too distant from the Nile Delta for the Israelites to have traveled in the time described in Scripture (preferring a location in northern or central Sinai). Others believe that Mt. Sinai was on the other side of the Gulf of Aqaba in what is Saudi Arabia today.

Sunrise from the Top

If you ever visit Jebel Musa, the program will almost certainly include a 2 a.m. ascent up the mountain in order to watch the sunrise. One way to avoid this is to carry a tent and sleeping bag and spend the night on the mountain. Sleeping is difficult with the wind and cold and becomes impossible when the noisy tourists begin arriving long before daybreak. The sunrise looks like this. Is it worth all the effort? You decide.

For historical images of the monastery, see Life in the Holy Land.

Mount Sinai, Egypt (Places of Peace and Power). Details many of the traditions that surround the site.

Mount Sinai (The Jewish Magazine). A well-written travel journal of a visitor to Jebel Musa.

Explore the Monastery (Geographia). Provides further information about St. Catherine’s Monastery. Features an interactive picture of the site which indicates the location of various features (such as the library and archives).