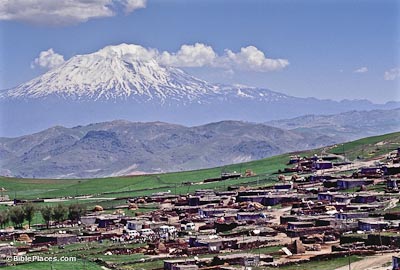 Urartu was the name of a kingdom in the 8th and 7th centuries BC, centered on the east shore of Lake Van. Urartu is cognate to the biblical name Ararat, which is mentioned in 2 Kings 19:37 as the refuge of Sennacherib’s sons after they assassinated him. But Ararat is best known to readers of the Bible as the place where Noah’s ark landed (Gen. 8:4). Ağrı Dağı, a dormant stratovolcano with an elevation of 16,945 feet (5,165 m), is the highest mountain in all of Turkey. It lay within the territory of the kingdom of Urartu, and today is commonly called Mount Ararat, identifying it as the resting place of Noah’s ship. The peak is capped with glaciers and is often obscured by cloud cover. 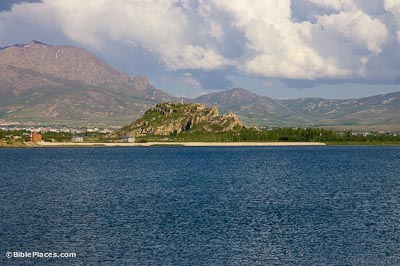 Van Kalesi, located on the eastern shore of Lake Van, is an isolated limestone ridge one mile (1.6 km) in length, 230–265 feet (70–80 m) in width, and up to 330 feet (100 m) in height. It was the site of ancient Tushpa, capital of the kingdom of Urartu. The name Van derives from Biainili, the Urartian name for their kingdom, and Tushpa was apparently derived from the name of the Urartian goddess, Tushpuea. The citadel contains Urartian inscriptions and royal tombs along with later Ottoman constructions. 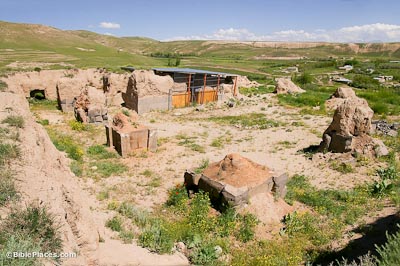 Ayanis was an Urartian fortress and city northwest of Van Kalesi on the shore of Lake Van. The fortress occupies a rocky hill 15 acres (6 ha) in size, and rises 655 feet (200 m) above lake level. The ancient name of Ayanis was Rusahinili Eidurukai (“Rusahinili in front of Mount Eiduru”), named for the Urartian king who built it, Rusa II (ca. 678–654 BC). Excavators have uncovered a pillared hall and a susi temple, or tower temple. A susi temple has a square plan with square buttresses in each corner. The temple facade contains the second longest Urartian inscription.

Overlooking the Gürpınar Plain, Çavuştepe is an Urartian fortress located southeast of Van Kalesi. It extends along the top of a limestone ridge for a distance of 2,950 feet (900 m) and encloses two hilltops. The Uratian name for the fortress was Sardurihinili, named after the Urartian king Sarduri II (ca. 765–733 BC). The fortress included a palace, a citadel, storerooms, and temples.

Urartu (Wikipedia). Encyclopedia entry on the ancient kingdom of Urartu.

Urartu (Livius). Provides a historical summary of the kingdom of Urartu.

Tušpa (Van) (Livius). Provides a historical and archaeological summary of the site.