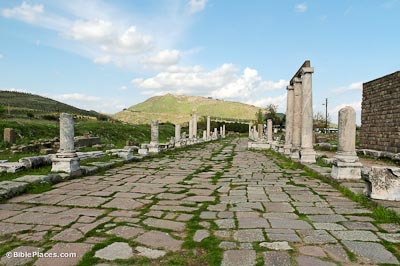 One of the seven churches addressed in Revelation, the city of Pergamum became the center of a large kingdom in the 3rd century BC and retained its status as a political and cultural leader into the Byzantine period.

The acropolis rises 1,300 feet (400 m) above the lower city located on the plain of the Caicus River. 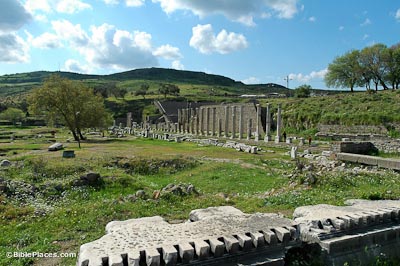 The god of healing, Asclepius received worship in cultic centers around the Greek and Roman world. This large complex at Pergamum was originally constructed in the 4th century BC and became an official center in the 3rd century. 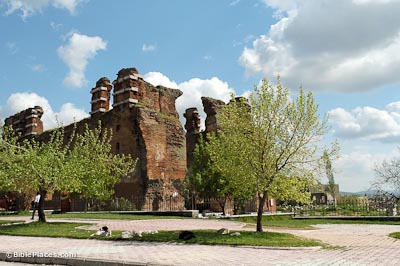 A temple to the ancient Egyptian god of the underworld was erected in the lower city of Pergamum. The Serapis cult was founded by Ptolemy I and was centered in Alexandria. Held to be a god of healing, particularly of blindness, Serapis was one of a number of Egyptian deities worshiped in ancient Greece and Rome. 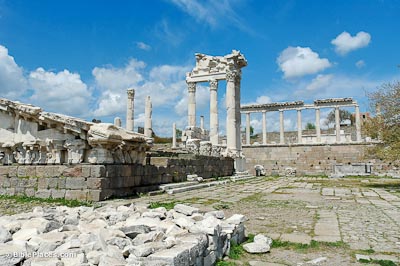 Some impressive remains of this 2nd century AD marble temple dedicated to the emperor have been restored. It sits next to the library which housed 200,000 volumes and was the second largest in the ancient world after Alexandria. Parchment was invented in Pergamum after relations with Egypt soured and papyrus became difficult to obtain. 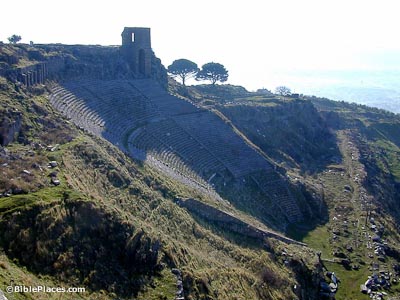 This theater is one of the steepest ones preserved in Turkey today. It sits on the edge of the city’s acropolis. It was built in the Hellenistic period and altered in the Roman period. The seating capacity of this theater is estimated at 10,000 people. 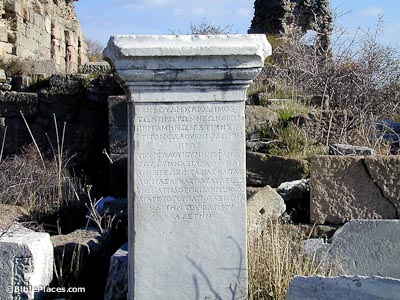 This white stone at Pergamum with names inscribed reminds of Jesus’s words: “And to the angel of the church in Pergamos write…He that hath an ear, let him hear what the Spirit saith unto the churches; To him that overcometh will I give to eat of the hidden manna, and will give him a white stone, and in the stone a new name written, which no man knoweth saving he that receiveth it” (Rev 2:12, 17).

Ancient Pergamon (Biblical Archaeology Society). Following a brief introduction to Pergamon’s history, archaeologist Sarah Yeomans provides a tour around the site, with a focus on the buildings on the acropolis.

Pergamum (All About Turkey). This page offers some additional interesting details about the site, including the dimensions of some of the major structures.

Pergamus (The Catholic Encyclopedia). A lengthy article detailing the history of the city from its founding to present day.

Pergamum (Kusadasi Guide). Among other details, this article discusses the architectural philosophy of this influential city, as it reflected the cultural and social values of its people.

Pergamum (Focus Multimedia). Offers a brief cultural and political history of the city; text only.

Thursday Is for Turkey: The Church in Pergamum (Christianity Today). Ed Stetzer discusses his visit to the site and embeds a video of a short sermon he preached on location.

The Seat of Satan: Ancient Pergamum (CBN). This video offers footage of the site and related artifacts.