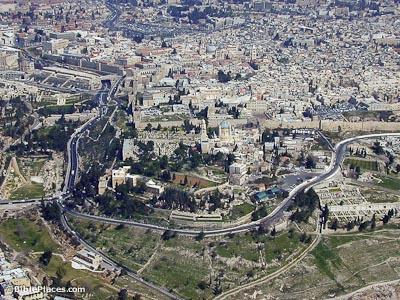 Aerial from the South

The modern Mount Zion is a misnomer applied by Byzantine pilgrims who thought that the larger, flatter Western Hill must be the original City of David. Archaeological evidence has shown that this hill was only incorporated within the city’s fortifications in the 8th century BC, but the name has stuck. The Hinnom Valley borders this hill on its western and southern sides. 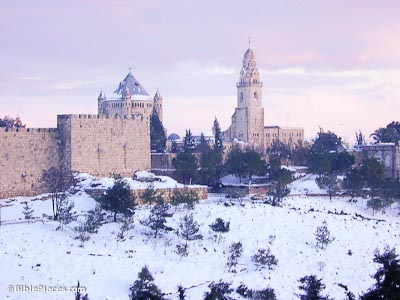 Crowning the summit of the modern Mount Zion is Dormition Abbey. Commemorating the rest that Mary entered into, this complex was constructed by Kaiser Wilhelm II beginning in 1900. The church was built in response to a request to have a German Catholic church in the city following the Kaiser’s support for the construction of the Lutheran Church of the Redeemer in 1898. 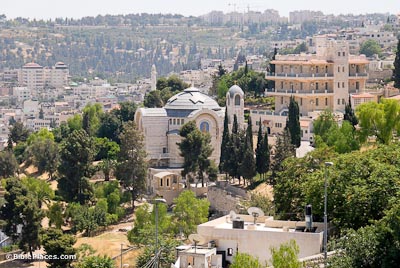 On the southeastern slope of the hill is one of the traditional locations for the house of Caiaphas. Gallicantu means “cock crowing” and it remembers the three denials of Peter. Built atop the ruins of a Byzantine church and monastery, Catholic pilgrims believe that the prison in which Christ was held is located inside the church. Others believe that a more likely location for Caiaphas’s house is in the Armenian property outside Zion Gate. 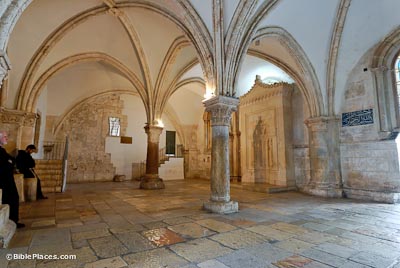 The room visited by tourists today is a Crusader structure as evidenced by the architecture. On the first floor below this room is the traditional tomb of David. The location of this “tomb” outside of the City of David precludes its authenticity but some suggest that evidence in the “tomb” indicates an early Jewish-Christian presence (or synagogue). If so, this could support this general area as the location of the biblical “Upper Room.” 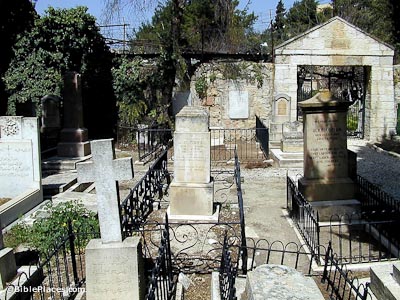 In the backyard of the Bishop Gobat School (today housing Jerusalem University College) is the Protestant Cemetery where many notables of the 19th century are buried. The writer of the hymn “It Is Well With My Soul,” Horatio G. Spafford, is buried in the far center of this photograph. Also buried in this cemetery are important archaeologists Sir Flinders Petrie and James Leslie Starkey. 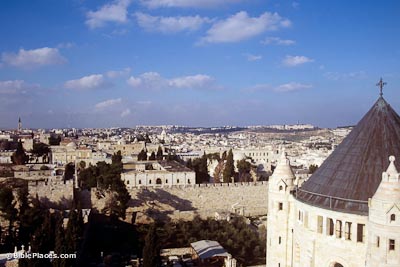 This rare shot from the top of the Dormition Abbey bell tower gives a view of Mount Zion and the Western Hill from the south. Visible are the south wall of the Old City and the Armenian Quarter with the Mount of Olives on the right horizon. Dormition Abbey is home today to German Catholic monks.

Mount Zion (See the Holy Land) A nice introduction to the area, including limited images.

Mount Zion (Century One Bookstore) An article taken from the book Palestine Explored, authored by a 19th-century resident of Jerusalem, Reverend James Neil.

Mount Zion (Crystalinks) A good (albeit slightly off the subject in parts) article discussing the role of the Western Hill in Jerusalem of Jesus’s day. Visual images include a good map of the Western Hill, photographs, and a schematic of the Madaba Map with pertinent locations marked.

The Upper City During the Second Temple Period (Israel MFA) An interesting article about the western hill occupation during the time of Christ.

Mount Zion (Frommer’s) A brief description of the main sightseeing attractions on the Western Hill, complete with directions and hours of operation.

The Basilica of the Dormition (official site) The introduction to the Dormition Abbey that gives full information about the church, its history, and even the organs.

The Cenacle – Room of the Last Supper (iTravel Jerusalem) Gives history and construction details of this site.

Who’s Buried in King David’s Tomb? (Jerusalem Post) A lengthy article discussing how the Western Hill came to be called Mount Zion, and a good look at the general history too.


Jerusalem, Mt. Zion (American Colony photo) This photo was taken from across the Hinnom Valley, looking northeast. It features the Dormition Abbey and the former Bishop Gobat’s School (now Jerusalem University College) and was taken in the early 20th century.

Jerusalem University College (university website) The campus is located on modern Mt. Zion.  This is a good school to consider for short-term and graduate studies in Israel.

Evidence of Babylonian Destruction Uncovered in Jerusalem (BiblePlaces Blog) An introduction with links to further details about 2019 discoveries on Mt. Zion that relate to the Babylonian destruction.