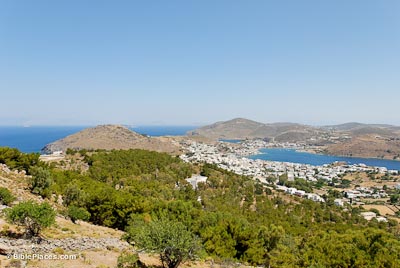 The small island of Patmos is about 7.5 miles (12 km) long from north to south and at its widest is 6 miles (10 km) from east to west. It is the northernmost island of the Dodecanese. With an area of 13 square miles (35 sq. km) and a circumference of 25 miles (37 km), the volcanic island presents a largely rocky and treeless landscape. 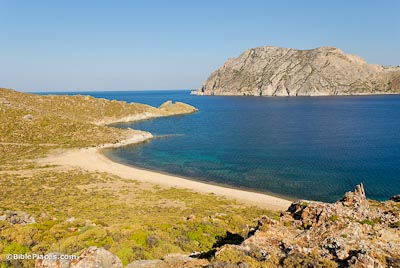 The book of Revelation explicitly states that it was written while John was on the island of Patmos. This is the only book in the New Testament where the place of writing is given. According to a tradition preserved by Irenaeus, Eusebius, and Jerome, John was exiled in AD 95 during the reign of Emperor Domitian. His exile ended upon the accession of Nerva in 96. 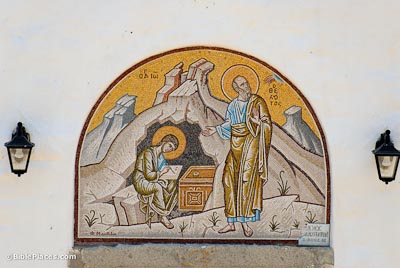 Rev 1:9 (ESV) “I, John, your brother and partner in the tribulation and the kingdom and the patient endurance that are in Jesus, was on the island called Patmos on account of the word of God and the testimony of Jesus.” 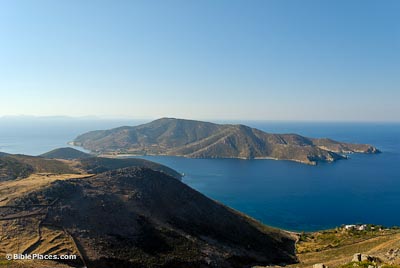 According to Pliny and Tacitus, the Romans often sent their prisoners to islands. Tacitus mentions three islands in the Sporades by name: Donusa, Gyarus, and Amorgus. That Patmos was not listed indicates that it was not a primary place for imprisonment at this time. It is not clear if John was imprisoned on Patmos or banished here to live. 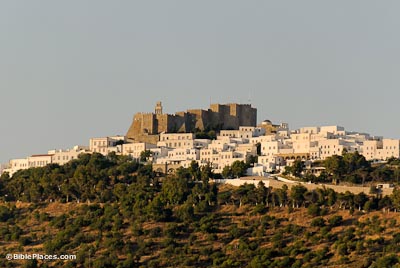 The most imposing building on the island is the Monastery of St. John the Theologian. Constructed by Christodoulos in 1088, the monastery is located in the town of Chora overlooking the harbor. With walls 50 feet (15 m) high, it was built like a fortress because of the threat from pirates. The monastery was built on top of the remains of a 4th century AD church and an earlier temple of Artemis. An inscription that mentions the temple of Artemis is displayed in the monastery’s museum. 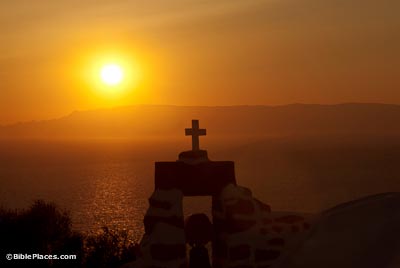 A tradition says that John received the vision of Revelation from heaven verbatim and dictated it to his assistant Procorus, who wrote it down. Procorus is mentioned in Acts 6:5 as one of the seven original deacons. Many other traditions on the island are associated with miraculous works of John and are found in the Acts of John by Prochorus, a pseudipigraphal work that was written in the 5th century and attributed to John’s scribe (cf. Acts 6:5).

See also our pages on the Gospel of John.

Patmos (GreeceTravel.com). A nice overview of the island, albeit from a touristy perspective.

Patmos – The Island of Revelation (GreekTravel.com). This overview is longer, and it opens with an excerpt from a poem inspired by the island.

Patmos (BibleHub). This page is short, but it has some interesting information

Patmos (MysteriousGreece.com). A page which condenses a lot of helpful information under its various subheadings.

Patmos (AegeanIslands.gr). This site has several pages connected with Patmos. While some are aimed exclusively at visitors, others have information that may be of interest.

PATMOS (Πάτμος), Greece (Robert Polasek). A video with footage of the island.