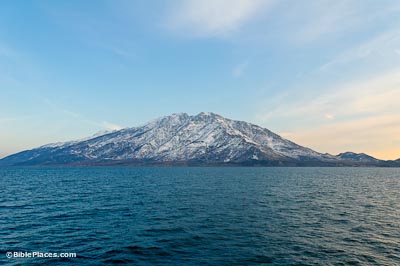 The island was known as the Samos of Thrace, or Thracian Samos (samos means “height” or “mountain”). Samothrace boasts the highest peak of all the Aegean mountains in Mt. Fengari, with an elevation of 4,750 feet (1448 m). The mountain serves as a landmark for sailors traveling in the area. Homer called Samothrace “Poseidon’s island” because Poseidon viewed the Trojan coast from its peak. It does not have a good natural harbor, so in ancient times ships would moor along the northern coast for protection from the southeast winds. 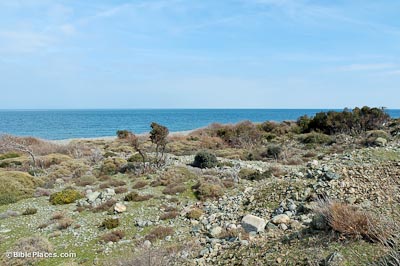 Paul spent the night at Samothrace on his way from Asia Minor to Europe. The ship left Troas and arrived at the island of Samothrace before proceeding the next day to the port city of Neapolis. This was near the beginning of his second missionary journey, and the start of Luke’s travels with Paul. Acts 16:11 (KJV) “Therefore loosing from Troas, we came with a straight course to Samothracia, and the next day to Neapolis.” 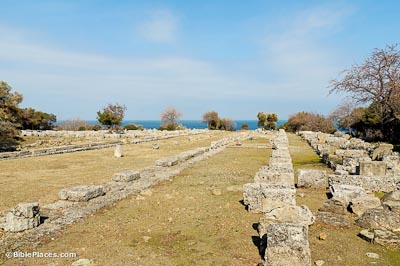 Samothrace became known as the center of worship of the pre-Greek gods, the Cabiri. These twin gods were believed to protect sailors, and if their wrath was aroused, they would stir up deadly storms. The worship of them was later merged with that of the Roman twin gods, Castor and Pollux, also patron gods of sailors. Worship at the cult center of Samothrace was shrouded in mystery and participants were forbidden from recording in writing any of the secret practices. 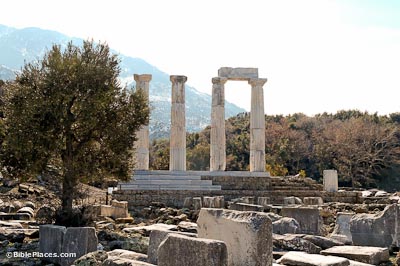 Anyone, including women and slaves, could be initiated into the secrets, which was a two-stage process. In the first stage, myesis, the participant engaged in a ceremony simulating life, death, and rebirth. The second stage, epopteia, connected cultic practice with a moral standard (rare in Greek religion). Initiates into the rites of Samothrace include Herodotus, King Lysander of Sparta, Ptolemaic queen Arsinoe II, and Emperor Hadrian. The parents of Alexander the Great, Philip of Macedon and Olympias, met each other at the island ceremonies.

Samothrace (BibleHub). This page is brief but has some very helpful information.

Samothrace (MysteriousGreece.com). A more thorough glance at what the area of Samothrace has to offer.

Winged Victory (Nike) of Samothrace (Khan Academy). This video is a short introduction to perhaps the most famous product of Samothrace.

Winged Victory (Ancient World Magazine). For those who prefer their information in written form.