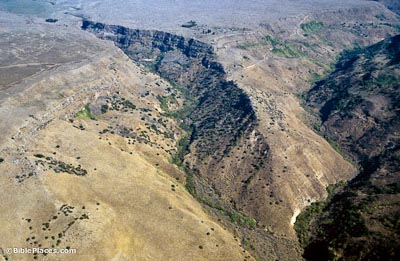 Known sometimes as the “Masada of the North,” Gamla is most famous for its strong defense against the Romans in the Jewish Revolt in AD 66. The site is bordered on all sides by deep wadis of the Golan Heights and is approachable by only one footpath from the northeast. The earliest settlement was in the Early Bronze Age and the site was reinhabited by returning exiles from Babylon. Herod the Great settled Jews here to populate his border cities. 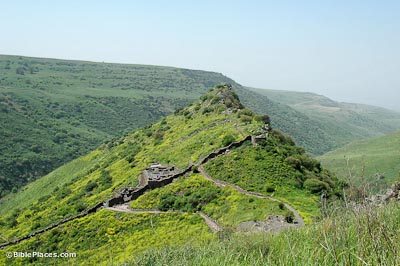 The natural defenses of Gamla mean that only the eastern side needed to be protected against invaders. In AD 66, Jewish rebels fortified this wall in advance of the Roman march across Galilee. Earlier in the century, the founder of the Zealots, Judas of Gamla led an uprising in AD 6. Gamaliel referenced this in the trial of the apostles as one of many unsuccessful attempts at rebellion (Acts 5:37). 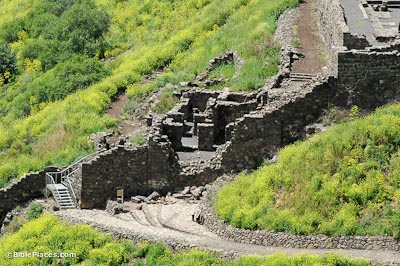 The Roman general Vespasian attacked the city with three Roman legions and after a month, they penetrated the city’s defenses. However, the men of Gamla killed many of the attackers and the Romans withdrew. A few days later, a second breakthrough was made and the Romans succeeded in capturing the city. Josephus reports that the Roman victory cost 9,000 Jewish lives. 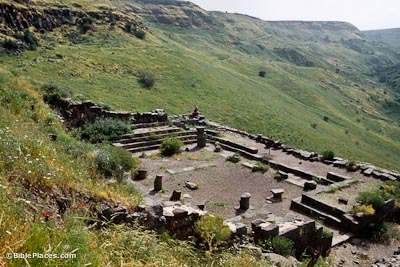 Near the city’s entrance stood the synagogue, one of the earliest known in Israel (early 1st century AD). This synagogue was built in the typical “Galilean” style with three rows of columns, tiers of side benches, heart-shaped corner pillars and an alcove for Torah scrolls in the northwest corner. A mikveh (ritual bath) was found near the synagogue. 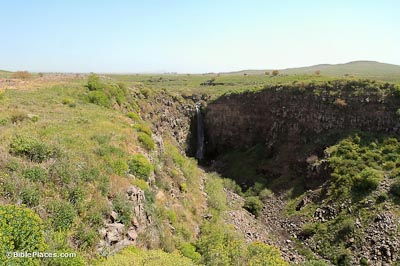 For other examples of fortresses, see Masada and Herodium.

Gamla (Jewish Magazine) An in-depth look at Gamla, with an emphasis on its history.

Gamla (The Israeli Mosaic) Contains informative sections on the ancient city, archaeology, the Yehudiya Reserve, and getting there. Links throughout allow for in-depth study.

Gamla (Jewish Virtual Library) Discusses the archaeological remains of the ancient city and the light they shed on details of the life and death of its inhabitants.

Gamla (Donald D. Binder) Stemming from a site dedicated to the study of the Second Temple Period Synagogues, this page spotlights the remains of the Gamla Synagogue. Many detailed photographs and sketches.