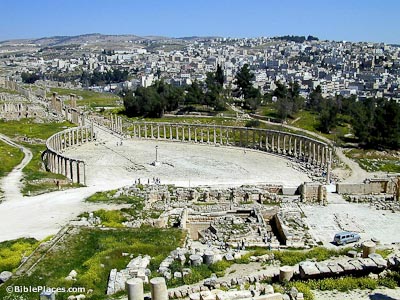 The biblical city of Gerasa is known today as Jerash. Gerasa was one of the cities of the Roman Decapolis and is one of the best-preserved cities of the Decapolis. The high point of Gerasa was in the 2nd century when it had a population of 20,000–25,000. Most of the ruins are from the Roman and Byzantine periods. The city was rediscovered in 1806 by Seetzen, and restoration of the ruins began in 1925. 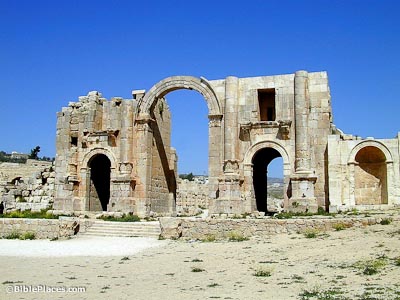 The city expanded in the 2nd century as far south as Hadrian’s Arch. Hadrian was called the “flying emperor” because he spent most of his time traveling to cities around the empire. This arch was built circa AD 130. The central gate was apparently only used for important visitors. The niches on either side were for statues.

The Temple of Artemis was built in the 2nd century AD. The columns are 40 feet (12 m) high and each drum weighs 20–40 tons. Artemis was the virgin goddess of nature and the hunt (the Romans called her Diana). The daughter of Zeus and the twin sister of Apollo, Artemis was one of the most popular Greek deities. She was like “Mother Nature,” life-giving and supportive on the one hand, but cruel and destructive on another. Artemis was also the patron goddess of a temple at Ephesus, whose well-being was threatened by the presence of the Gospel (Acts 19). 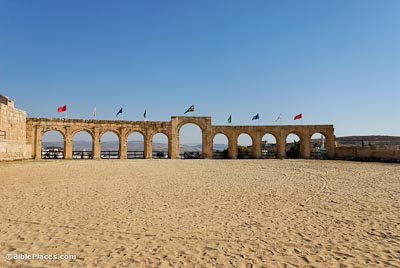 The hippodrome dates to the 2nd century AD and seated 10,000–15,000 spectators. Little of the hippodrome is left because the stones were robbed out by the Circassians who settled in Jerash in the late 19th century. Extensive reconstruction has been undertaken by the Jordanian authorities in the last decade. 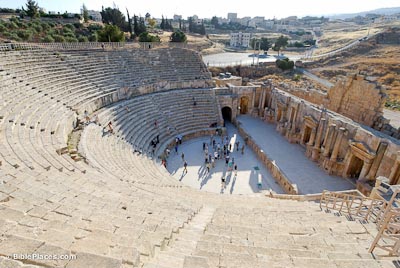 Gerasa had three theaters. The south theater was begun in AD 90 and would fit 3,000 people on its 33 rows. Above the side entrances were the royal box seats. Awnings often covered theaters to provide shade for the spectators. 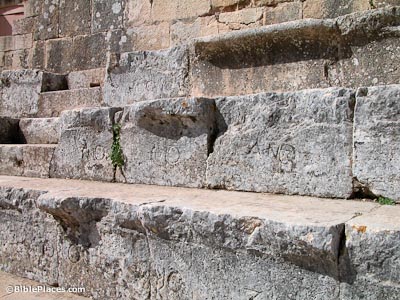 The seats of the theater were inscribed with Greek letters to indicate to whom the seat belonged. Such inscriptions were used to identify as theater seats some stones found in Jerusalem.

Jerash (Ancient History Encyclopedia). A good introduction to the site and its history.

Gerasa (Livius). Has bullet points with interesting information, but is most helpful for the photos.

Gerasa (See The Holy Land). A useful description of the site’s various features.

Jerash (Near East Tourist Agency). This lengthy article has lots of satellite photos with helpful labels.

Jerash (Jordan Distribution Agency). Digitalized material from a tourist pamphlet published in Amman in 1973, including a brief history, a plan of the Roman city and black and white photos (low quality).