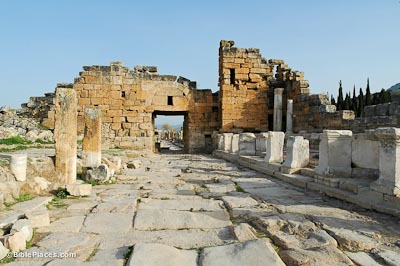 Hierapolis, the “Sacred City,” is located at present-day Pamukkale in south central Turkey. In the 1st century, it was part of the tri-city area of Laodicea, Colossae, and Hierapolis. This connection between the cities lies behind Paul’s reference to Hierapolis and Laodicea in his epistle to the Colossians (Col 4:13). Before AD 70, Phillip (either the apostle or the evangelist) moved to Hierapolis, where he was believed to have been martyred. 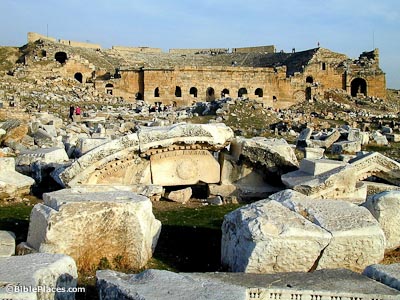 In the foreground of this picture are the remains of the Apollo Temple. Its foundations date to the Hellenistic period, but the structure itself was built in the 3rd century AD. Apollo was thought to be the city’s divine founder. The temple was built beside the plutonium, an underground cavern from which poisonous gases emerged. The city’s theater stands in the background. 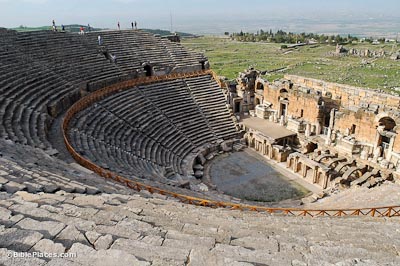 After an earthquake in AD 60, a theater was built against a hillside. This theater contains one of the best examples of original Roman theater decoration. The stage was ornate, decorated with various reliefs. A seat for distinguished spectators was located in the center of the seating area (cavea). Approximately thirty rows of seats are preserved. 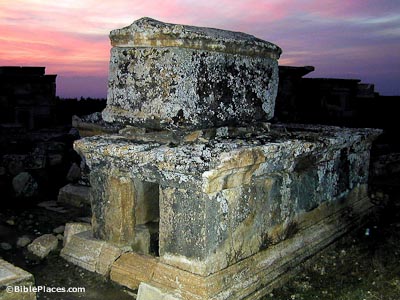 Another prominent archaeological aspect of Hierapolis is the necropolis, located just outside the northern city walls. Here lies one of the largest and best-preserved cemeteries in all of Turkey. It contains sarcophagi, many different types of tombs, and funeral monuments dating from the Hellenistic until the early Christian times. There are also numerous inscriptions here, more than 300 of which have been translated and published.

Hierapolis (Turizm.net). Focuses not only on the founding and history of the city, but on various cultural aspects including religion, entertainment, and industry.

Hierapolis (Kusadasi Guide). Gives an informative history of the city, including its rise and fall in fame. Includes a brief section on getting there for tourists.

Pamukkale (Hierapolis) (All About Turkey). Highlights both the ancient remains of the city and the present attraction of the site’s unique geological formations. Includes links to other informative articles within this tour guide’s site.

The Theatre at Hierapolis (The Ancient Theatre Archive). A close look at the ancient theater.

Hierapolis and the Gateway to Hell (Biblical Archaeology Society). Briefly discusses the Plutonium.

Ancient History of Hierapolis, Pamukkale, Turkey (YouTube). For those who prefer their information in video form, this documentary is a good introduction.

Pamukkale & Hierapolis, Turkey in 4K Ultra HD (Youtube). The video has no commentary, but the footage is gorgeous.