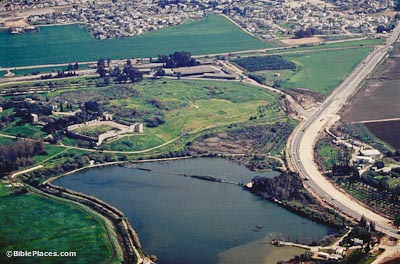 Aphek has always been a strategic fortress because of its geographical location. It lies at the headwaters of the Yarkon River, which blocks traffic on the coast and forces the International Coastal Highway through a narrow funnel between the river and the mountains. The two coastal routes south of Aphek are forced to converge here and continue on to Mount Carmel. The strategic nature of this site continued through the Turkish period, and the fort pictured at left was built by the Ottoman ruler Suleiman the Magnificent. 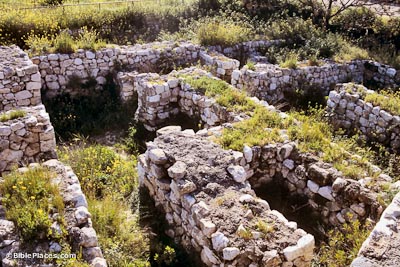 In the Late Bronze Age, the Egyptians established a post here to guard the road.  Excavations uncovered a number of inscriptions from this “governor’s residence.”  Sometime later, Aphek was the location of the Philistine encampment when they fought the Israelites and captured the Ark of the Covenant (1 Sam 4).  At the end of Saul’s reign, the Philistines gathered here again, and David was turned back and not allowed to join the battle against the Israelites (1 Sam 29). 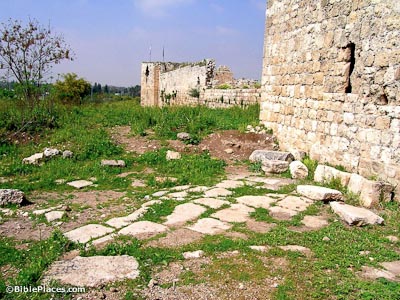 When Herod the Great became king (37-4 BC), he rebuilt Aphek and named the city Antipatris after his father Antipater.  Archaeological work has revealed the city’s Cardo, with shops on both sides of this main street. After Paul’s arrest in Jerusalem, the Romans spirited Paul out of the city to avoid a plot on the apostle’s life (Acts 23). The contingent of troops brought him to Antipatris (about halfway) before continuing on the next day to Caesarea.  The city was destroyed in AD 363 by an earthquake. 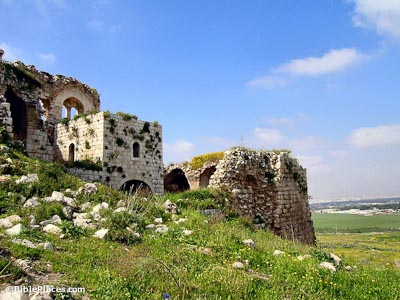 The Crusaders also recognized the strategic value of this area and built a castle on the hill overlooking the ancient site.  This castle was called “Migdal Aphek” (Tower of Aphek) and was built over the site of a Jewish fort from the time of the First Jewish Revolt (AD 66-70).  The castle is also known as “Mirabel” (beautiful view).  Most of the ruins visible today are from the Turkish period.

Tel Aphek – Antipatris (Gems in Israel) A brief history of the site.

Canaanite Aphek (Penn Museum) An article by Moshe Kochavi, discussing the excavation and archaeological finds from Aphek, along with a special section concentrating on inscriptions.

Tel Afek (Israel) Gives information regarding both the archaeological site and the nature preserve.