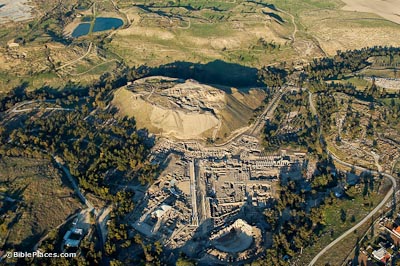 Located 17 miles (27 km) south of the Sea of Galilee, Beth Shean is situated at the strategic junction of the Harod and Jordan Valleys. The fertility of the land and the abundance of water led the Jewish sages to say, “If the Garden of Eden is in the land of Israel, then its gate is Beth Shean.” It is no surprise then that the site has been almost continuously settled from the Chalcolithic period to the present. 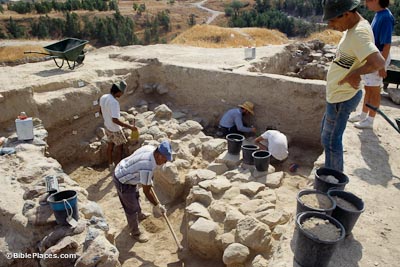 Excavations were conducted in 1921–33 by the University of Pennsylvania under C. S. Fisher, A. Rowe, and G. M. FitzGerald. At that time, almost the entire top five levels on the summit of the tell were cleared. Yadin and Geva conducted a short season in the 1980s, and Amihai Mazar led a Hebrew University excavation in 1989–96. The main finds on the tell include a series of temples from the Middle and Late Bronze Ages. 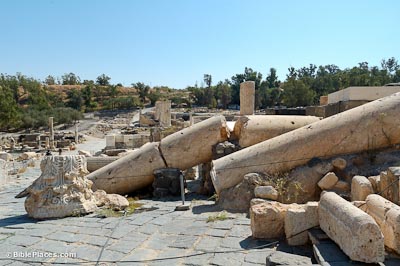 Pompey and the Romans rebuilt Beth Shean in 63 BC and it was renamed Scythopolis (“city of the Scythians;” cf. Col 3:11). It became the capital city of the Decapolis and was the only one on the west side of the Jordan. The city continued to grow and prosper in the Roman and Byzantine periods until it was destroyed on January 18, 749 by an earthquake. Evidence of this earthquake includes dozens of massive columns that toppled over in the same direction. 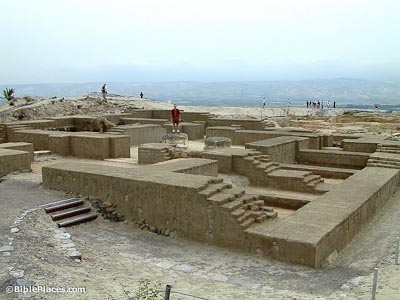 Beth Shean was the center of Egyptian rule in the northern part of Canaan during the Late Bronze Period. Monumental stelae with inscriptions from the reigns of Seti I and Ramses II were found and are now in the Rockefeller Museum in Jerusalem. Also, a life-size statue of Ramses III as well as many other Egyptian inscriptions were found. Together these constitute the most significant assemblage of Egyptian objects in Canaan. The photo at right reflects recent reconstruction of the mudbrick walls.

Find historical photos of Beth Shean at Life in the Holy Land. For a chapter of Scripture related to this site, see 1 Samuel 31.

Tel Beth Shean: An Account of the Hebrew University Excavations (Rehov.com) An excellent resource on the archaeological history and discoveries made on the tell. It is a summary of the excavations carried out between 1989–96, written by the director of the excavations, Amihai Mazar. It presents their discoveries chronologically, organized by archaeological periods. Includes a few sketches, reconstructions, and photos. This can be found as a PDF here; note particularly the stratigraphic chart on page 244.

Bet(h) Shean, Israel (Jewish Virtual Library) This is a longer than usual article from JVL with an in-depth look at the history of the site and the related archaeology, brief information on modern history, and finished with quite an extensive bibliography.

Beth Shean, the Death of Saul and more (Lion Tracks) Features a model of the city as it looked in the Roman Period. Also provides some pictures of the site in the springtime and a summary of the biblical passages related to the ancient city.

Tel Beth-Shean Overview (Rehov.com) Straightforward and just a few paragraphs; this serves as a good introduction.

Beth Shean (Scythopolis) (NET) Provides several pages of information on the site, discussing its strategic location, various features of the Roman city, the story of Saul, and practical information about visiting the site. Several maps and pictures are featured.

Synagogue Floor at Beth Shean (IMJ) A nice photo of a synagogue floor from the 5th–7th centuries AD, now on display at the Israel Museum.

Beit She’an (The Jewish Magazine) A magazine article covering the history of the site and the features that can be seen when visiting there today.

Israeli Archaeologists Unearthing Treasures Of a Long-Lost City (New York Times) This 1992 article gives some historical context to the excavations at Beit Shean.