A 6th-century church floor in Medeba, Jordan, has a mosaic map of the land of Israel with numerous place names in Greek.

The center of the map is an open-faced depiction of Jerusalem with the city walls, gates, churches (with red roofs), and the Cardo.  This main street of the city is depicted with two rows of colonnades running the length of the city from north to south. 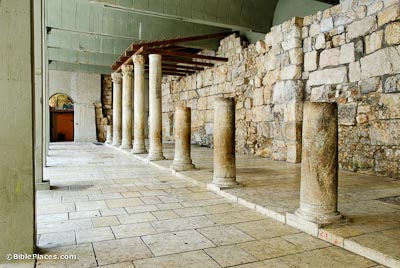 Uncovered by Nahman Avigad’s team in the 1970s, the Cardo in the Jewish Quarter was excavated for about 650 feet (200 m).  This portion dates to the time of Emperor Justinian in the first half of the 6th century AD.  An earlier portion of the Cardo was constructed in the Roman period beginning at the modern Damascus Gate in the north, but it didn’t stretch this far south until centuries later. 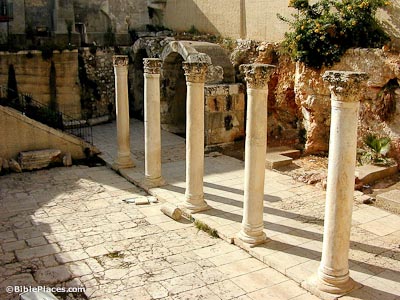 The central street of the Cardo is 40 feet (12 m) wide and is lined on both sides with columns.  The total width of the street and shopping areas on either side is 70 feet (22 m), the equivalent of a 4-lane highway today.  This street was the main thoroughfare of Byzantine Jerusalem and served both residents and pilgrims.  Large churches flanked the Cardo in several places. 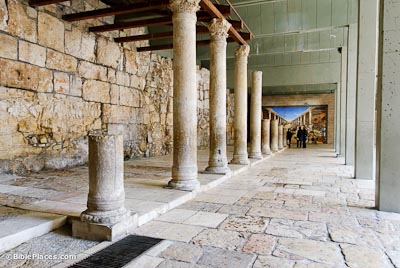 The columns supported a wooden (no longer preserved) roof that covered the shopping area and protected the patrons from the sun and rain.  Today the Byzantine street is about 20 feet (6 m) below the present street level, indicating the level of accumulation in the last 1,400 years. 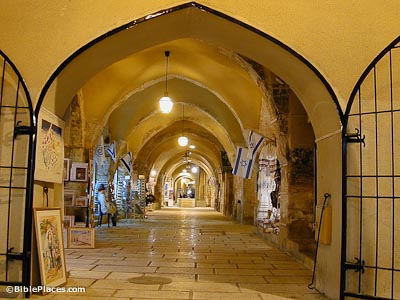 A portion of the Cardo has been rebuilt as a modern shopping lane.  Jewish storekeepers sell fancy souvenirs and keepsakes to tourists “for a good price.”  This street continues north to Damascus Gate; as it leaves the Jewish Quarter it becomes the division between the Christian and Muslim Quarters.  As in ancient times, this street is still the main thoroughfare in the Old City, but today it is much narrower than it once was.

Who Built the Cardo in Jerusalem? (Bible History Daily) A readable article regarding Cardo construction, with a reconstruction of the Nea Church and several photos included.

Jerusalem: The Eternal City (Israel MFA) Spotlights important archaeological sites around Jerusalem, including the Cardo. Includes an enlargeable photo of each site featured.

The Cardo (3DIsrael)  Virtual tour experience of this historic route, includes a brief historical description of the Street of the Pillars.

Jerusalem (Terragalleria) A basic directory of Jerusalem pictures. Pictures include the city, its streets and religious sites.

Ancient Jerusalem Revealed: the Eastern Cardo (BiblePlaces Blog) Discusses the ongoing excavations on the eastern cardo, near the Western Wall.

Jerusalem in the Byzantine Period (Jerusalem Studies) The sections on Justinian Jerusalem and the Madaba Map will be of particular interest to those researching this topic.

Byzantine Emperor Justinian Mosaic Uncovered in Jerusalem (Breaking Israel News) This 2017 article describes the discovery and implications of another Justinian mosaic in Jerusalem.

The Medeba Map & the Cardo

Byzantine Jerusalem and the Madaba Map (Personal Page) Reviews the Byzantine history of Jerusalem through a glimpse at the Jerusalem medallion in the Medeba Map.

The Madaba Map (Municipality of Jerusalem) Glimpses Jerusalem through the eyes of the famous Byzantine period map.