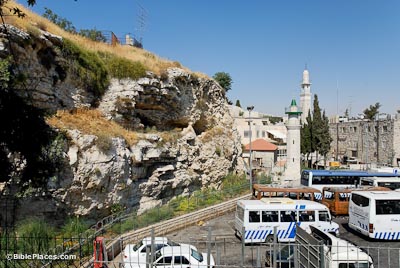 In Jerusalem for a visit in 1883, General Charles Gordon spied a prominent rocky crag which looked to him like it could be the “place of the skull” mentioned in the Bible as where Jesus was crucified.

Around the corner, a previously discovered rock-hewn tomb was associated with the escarpment, and Gordon popularized the view that this was the actual place where Jesus was crucified and buried. 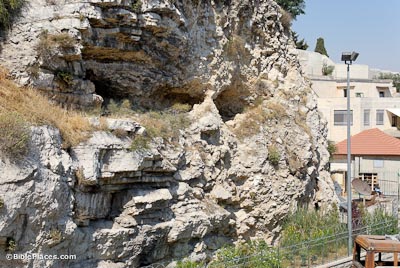 The Hill of the Skull

The slope has eroded badly in the last hundred years, but some maintain they can still see the eye sockets and the nose bridge. Regardless, it should be noted that while the Bible locates the crucifixion at the “place of the skull,” it never says that it was on a hill, nor that this place bore the resemblance of a skull. It also could be asked if this hill which resembles a skull looked the same 2,000 years ago. 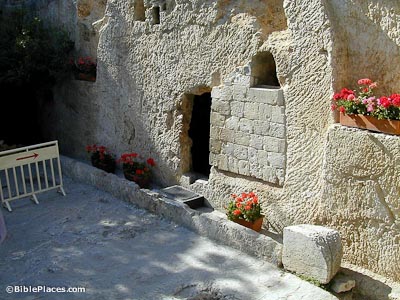 While officially the Garden Tomb Association only maintains this as a possible site for Christ’s burial, some tour guides of the site are convinced of the authenticity. They note the large cistern nearby, which proves the area must have been a garden in Jesus’s day. They claim that marks of Christian veneration at the tomb also prove its sanctity throughout the ages.

This tomb is the place believed by many to be the resting place of Jesus. Some archaeologists question the authenticity of the tomb because typological features suggest that it is a tomb originally hewn in the time of the Old Testament and not a “new tomb” as specifically stated in Scripture.

See BiblePlaces’s Church of the Holy Sepulcher page for related pictures, text, and links. For historical images of Gordon’s Calvary, see Life in the Holy Land.

The Garden Tomb (The Garden Tomb [Jerusalem]) The official website. Learn more about the grounds through the embedded video, or explore other pages within the website.

Garden Tomb (See the Holy Land) Presents the merit of the site as a better environment for meditation and worship but holds to the Holy Sepulcher as the more probable location for the events of the cross.

The Garden Tomb: Where Jesus Rose Again? (CBN News) A 2018 article from a 2010 presentation, this article has some archaeological misconceptions but presents the view that the Garden Tomb is the correct location.

The Garden Tomb (Orange Street Congregational Church, London) An interview with the keeper of the tomb in 1965.

Garden Tomb (GoJerusalem) A secular perspective on the Garden Tomb and its location.

Garden Tomb – Jerusalem (Sacred Destinations) Presents some of the problems with the site of the Garden Tomb, accompanied by the history and what to look for when you arrive.

The Garden Tomb (Bein Harim Tours) This readable article discusses the Garden Tomb and briefly touches on the site of the Holy Sepulcher also, but does not express a definite opinion for the validity of either site.

The Garden Tomb | What’s The Story Behind This Place? (Sar-El) This article also takes a neutral approach to the site’s authenticity while offering a useful overview.

Theories with Regard to the Positions of Golgotha and the Tomb (chapter from Charles Wilson’s book titled Golgotha and the Holy Sepulchre) This chapter discusses various locational theories, spending significant time concentrating on the Garden Tomb. As a 1906 publication, it provides a dated view that makes several valid points. Pages 103–120 in the original, or pages 132–153 in the PDF.