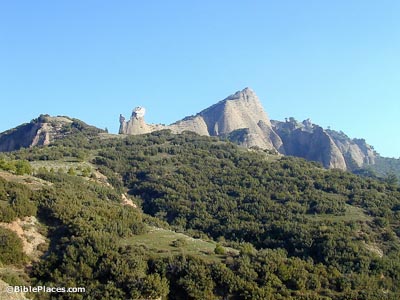 Known biblically as the home of the church that received the fifth of letters to the seven churches in Revelation, Sardis was the capital of the Lydian empire and one of the greatest cities of the ancient world.

Located on the banks of the Pactolus River, Sardis was 60 miles (97 km) inland from Ephesus and Smyrna. The city was home to the famous bishop Melito in the 2nd century. 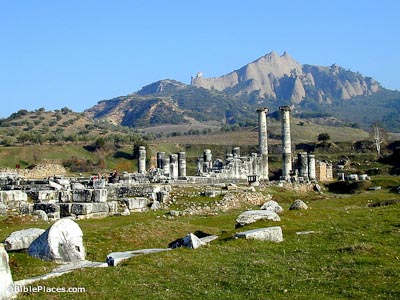 Artemis was the main goddess of the city and the temple dedicated to her in Sardis was one of the seven largest Greek temples (more than double the size of the Parthenon).

Artemis, known as Diana by the Romans, was the daughter of Zeus and twin of Apollo. She was the goddess of the hunt, the moon, and fertility. 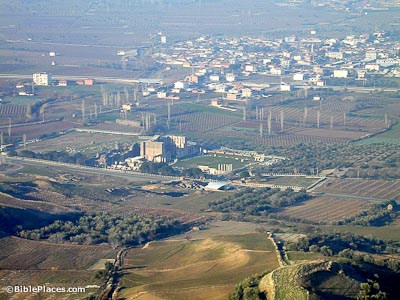 “And unto the angel of the church in Sardis write . . . I know thy works, that thou hast a name that thou livest, and art dead. Be watchful, and strengthen the things which remain, that are ready to die: for I have not found thy works perfect before God. Remember therefore how thou hast received and heard, and hold fast, and repent. If . . . thou shalt not watch, I will come on thee as a thief” (Rev 3:1-3).

A large complex built in the center of the lower city in the 2nd century AD included a gymnasium and a bathhouse.

The complex was over five acres (2 ha) in size and its western part was characterized by large vaulted halls for bathing. The eastern part was a palaestra, a large open courtyard for exercise. 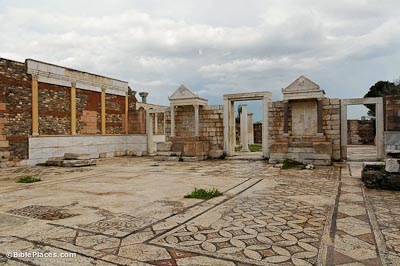 The synagogue of Sardis is notable for its size and location. In size, it is one of the largest ancient synagogues excavated. In location, it is found in the center of the urban center, instead of on the periphery as synagogues typically were. This attests to the strength and wealth of the Jewish community in the city. This synagogue came into use in the 3rd century AD.

Sardis (The Met). The article on the site is interesting on its own, but the pictures of artifacts found at Sardis are of particular note.

Sardis (Focus Multimedia). Highlights interesting and important facts about the city in a brief, reader-friendly format.

The Archaeological Exploration of Sardis (SardisExpedition.org). This website belongs to the Harvard team excavating Sardis. It is abundant with information and photos.

Sardes (The Catholic Encyclopedia). Gives a brief, but rather technical history of the ancient city. Text only, no pictures.

Jewish Sardis (Turkey) (Turkey Travel Planner). Written by the author of the original Lonely Planet guide to Turkey, this site offers a practical look at Sardis, with an emphasis on Jewish roots.

Turkey and Seven Churches of Revelation Photo Album (ArcImaging, Rex Weissler). Photographs from a tour of Turkey highlight important archaeological features of the city. Scroll to “S” section or click on the appropriate photo tour at the top of the page.

Artists’ visions/versions of ancient Sardis (The Harvard Gazette). An article looking at this history of artistic reconstructions of Sardis.