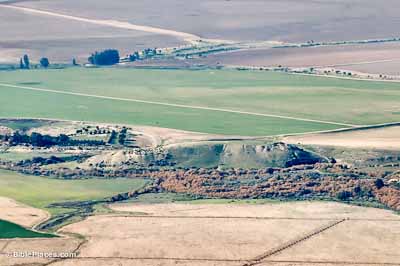 Ziklag was listed as one of the 29 towns in Negev and was assigned to the tribe of Simeon (Josh 15:31; 19:5). It was apparently controlled by the Philistines during King Saul’s rule, and was given by King Achish of Gath to David when he was running from Saul. David used it for a home base for raids against various groups who threatened the southern borders of Judah (1 Sam 27). Once, after being away, he returned to find it ransacked by the Amalekites (see Nahal Besor).

Numerous sites have been proposed for the biblical Ziklag. A. Alt suggested Ziklag was to be located at Tell Halif (Khuweilfeh), and the site was excavated by Joe Seger, with remains found mainly from the Early and Late Bronze Ages (3200–2350 & 1550–1200 BC), but not from the time of David (1000 BC). Tell Masos was proposed, but it also lacks remains from the right time. V. Fritz has advocated locating Ziklag at Tell Sheba (identified here as Beersheba), assuming that biblical Beersheba is located underneath the ruins of modern Beersheba.

The photographs on this page are of Tell Sera (Tell esh-Sharia), which is identified as Ziklag by most scholars including Aharoni, B. Mazar, Kallai, Rainey, Na’aman, and Seger. The site is situated midway between Beersheba and Gaza at 535 feet (163 m) above sea level. About five acres (2 ha)at the summit, the tell is horseshoe-shaped with steep slopes on all sides except on the west side. Six seasons of excavations by Eliezer Oren in the 1970s uncovered remains from Chalcolithic to early Islamic periods.

Ziklag (Wikipedia). Provides a discussion of the biblical references to the city.

Where is David’s Ziklag? (Center for Online Judaic Studies). This article written by Volkmar Fritz and originally published in Biblical Archaeology Review considers the possible sites for Ziklag and concludes that the site is what most consider to be Beersheba.

Is Khirbet a-Ra‘i Ziklag? (The Times of Israel). A new claim by Yosef Garfinkel that Ziklag is actually located at the site he is excavating next-door to Lachish. The article includes responses by Aren Maeir and Israel Finkelstein. Todd Bolen’s brief rejection of the theory is here.