Gates of the Old City 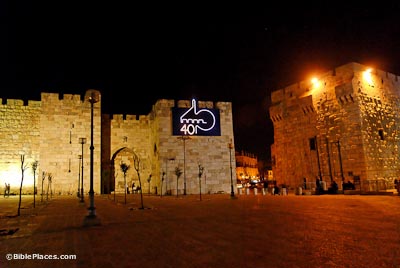 So named because the road leading from it goes to the port city of Jaffa (Joppa), this gate is the only one on the western side of the Old City.

A low part of the city wall was torn down and part of the Crusader moat of the Citadel filled in 1898 for the visit of the German Kaiser Wilhelm II.  This gate was also the famous scene of the English General Allenby’s entrance in 1917. 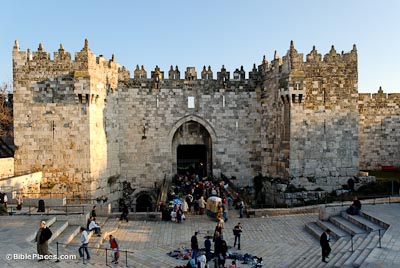 Called the Shechem Gate by the Jews, the Arabs remember this gate as the “Gate of the Column” because of the tall pillar that stood in this gate’s plaza during the Roman and Byzantine period.

Kenyon’s excavations underneath this Turkish gate found remnants of a triple-arched gateway dating to the time of the Roman Emperor Hadrian (AD 135). 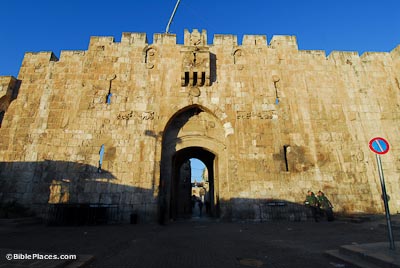 This gate is so named because of the tradition that the first Christian martyr was stoned outside this gate.  However, an earlier tradition locates this execution north of the city.

Lions’ Gate is another name for this eastern entrance into the Old City because of the four animals that decorate the gate’s facade, reportedly placed there because of a dream of the builder Suleiman. 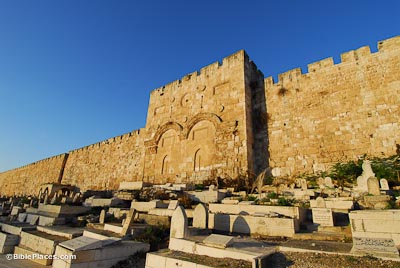 This sealed gate on the eastern side was built approximately AD 640 either by the last of the Byzantine rulers or by the first of the Arab conquerors.  The tradition that equates this gate with the one mentioned in Ezekiel’s prophecy (ch. 44) is dubious at best.

Leen Ritmeyer believes that an earlier gate is preserved underneath the current gate. 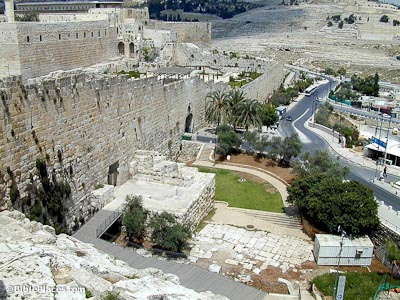 Different theories account for the naming of this gate, including one which puts it back to Omar’s conquest of Jerusalem in AD 638 when trash was cleared out of the city through this gate.  It is also known as the Gate of the Moors because of the North African immigrants who lived in a neighborhood next to the gate in the 16th century. 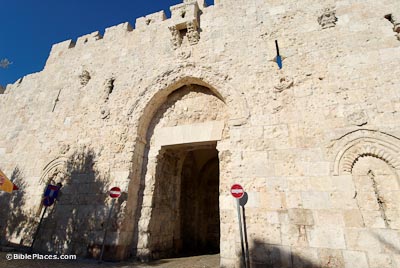 Providing access to Mt. Zion, this gate bears the marks of the Arab and Israeli battles in the 1948 War of Independence.

This gate is also known as the Gate of the Prophet David because of the traditional location of David’s tomb on Mt. Zion.  During the medieval period, it was called the Gate of the Jewish Quarter.

The Old City Gates (Jewish Virtual Library) Brief information on each gate with helpful links to relevant in-depth topics throughout the text.

Portals to History and Conflict: The Gates of Jerusalem’s Old City (Reuters.com) Easy to read, and accompanied by four small images.

The Gates of Jerusalem (Jewish History) This article looks explicitly at biblical mentions of gates in Jerusalem, and how that correlates with what we see now. It comes from an 1850 publication by Rabbi Joseph Schwarz titled Descriptive Geography and Brief Historical Sketch of Palestine.

Gates of Jerusalem (templemount.org) Accompanied by a simple map and a nice number of older photographs, this serves as a good introduction. It particularly highlights the Golden Gate.

Jerusalem Then and Now: A Journey in Photos (Times of Israel) This fascinating post gives a simple look at Jerusalem through contrasting photos from the late 1800s and modern-day. Note in particular photo sets #1 and #18 (Damascus Gate), #12 (Lions’ Gate), #13 (Zion Gate), and #14 (Jaffa Gate).

Jaffa Gate (BibleWalks.com) A lengthy history of the area with several high-resolution photographs.

New entrance, breach in the wall (American Colony photo collection) For those interested, here is a photo taken between 1918 and 1922, featuring the Jaffa Gate with its clock tower.

Zion Gate – The Battle Over Early Zionist Symbols (The Schechter Institutes) This article concentrates on the name’s history more than the physical gate.

Visiting the Temple Mount (by Lambert Dolphin) Contains an informative section on the Golden Gate, explaining many of the traditions and views associated with the blocked Eastern entrance to the Temple Mount.

The Golden Gate of the Temple Mount in Jerusalem (Leen Ritmeyer) Several nice photos and reconstructions accompany this informative and fascinating article.

Golden Gate Interior (Der Standard) The article is in German, but this 2019 photo of the interior of the Golden Gate is a rare treasure.

The Lions Gate in Jerusalem (All About Jerusalem) Supplemented by a few photos, this article gives some history for the Lions’ Gate.

Lions’ Gate (Jerusalem Municipality) While this website lacks editing (and capital letters), it presents an easy-to-read history of the gate.

The Damascus Gate (Bible History) History, photos, and a map are all included on this site.

Damascus Gate (Life in the Holy Land) Four photos taken in the early 20th century are accompanied by text from older publications describing the Damascus Gate.

Jerusalem’s Ancient Damascus Gate is at the Heart of a Modern Wave of Violence (Washington Post) Looks especially at modern controversies playing out near this gate.