Since Edward Robinson’s identification in 1838, most scholars have identified the Arab village of Beitin as Bethel. Robinson’s search for Bethel was based on Eusebius’s measurements. He measured the mileage by how fast his horse covered the distance. He calculated 12 Roman miles (just over 11 English miles [17.6 km]) north of Jerusalem to be at Beitin. Robinson believed “beitin” was a preservation of the name, Bethel, with the ‘l’ changed to an ‘n,’ something which often occurs in names. Once he located Bethel, Robinson went to the east and found the ruin of et-Tell, and identified it as Ai. 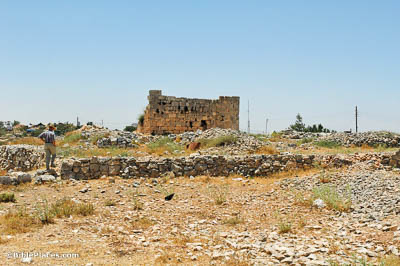 Burj Beitin, the "Tower of Bethel"

Located just southeast of Beitin, Burj Beitin (“Tower of Bethel”) was the site of a large Byzantine church that was constructed in the 4th century AD. A large tower (i.e., “burj” in Arabic), which dates to the time of the Crusades was built directly over the church. In his updated entry on Ai in the Onomasticon (dated to AD 390), Jerome added the following to Eusebius’s earlier entry “There also is a church built where Jacob slept as he passed through to Mesopotamia, whence also he gave it the name Bethel, that is, House of God (Onom 7.1).” In AD 333, the anonymous Pilgrim of Bordeaux also visited Beitin, which he called ”Bethar,” and mentioned the church where “Jacob saw the vision.” 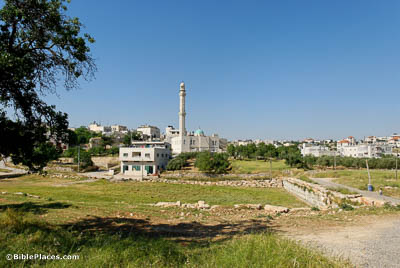 Bethel in the Bible

Bethel is mentioned about 70 times in the Old Testament but never in the New. It first appears in connection with Abraham’s arrival in Canaan when he pitched his tent and built an altar between Bethel and Ai. Later his grandson Jacob saw a vision of the Lord here, and then returned here after his sojourn in Paddan Aram. The city was conquered in the time of Joshua and served as a base for the Israelite tribes attacking the wicked Benjamites (Josh 8, 12; Judg 20). Samuel’s circuit included a stop at Bethel, and Elijah had an unpleasant encounter with some cruel youths (1 Sam 7; 2 Kgs 2). Bethel later became famous as the home of Jeroboam’s shrine with the golden calf (1 Kgs 12), for which it was condemned by various prophets (1 Kgs 13; Hos 10; Amos 3, 4, 5, 6, 7). 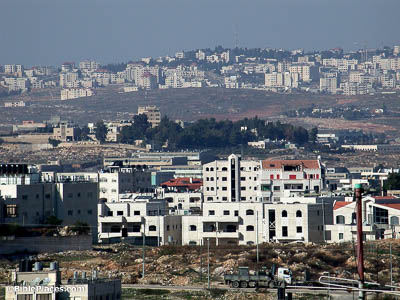 David Livingston has argued that Bethel should be identified with el-Bireh (top center of photo) instead of Beitin based on the counting of the Roman miles. Several milestones have been found on the road, some of which have numbers. Livingston argues that 12 Roman miles (just over 11 miles [17.6 km]) from Jerusalem is el-Bireh.