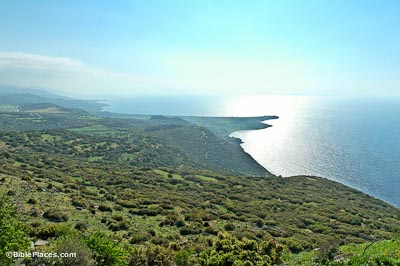 Assos is located in a region of Mysia (northwest Asia Minor) called Troad. It is built on a great volcanic cone 700 feet (215 m) high, making it a well-fortified site with both natural and artificial terraces. In 331 BC, the philosopher Cleanthes was born here, and it has been suggested that Paul’s statement in Acts 17:28 (“as even some of your own poets have said, ‘For we are indeed his offspring’” [ESV]) is quoting from Cleanthes. 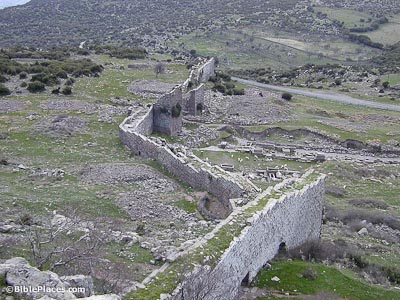 These city walls were constructed by the Greeks in the 4th century BC and are very well preserved. On the last leg of his third missionary journey, Paul walked from Alexandria Troas to Assos (Acts 20:5-6,13-14), where he met his companions, who had gone ahead of him by sea. It was about a 20-mile (32-km) journey, and judging from the positions of the cities, he likely entered Assos through this northwest city gate. 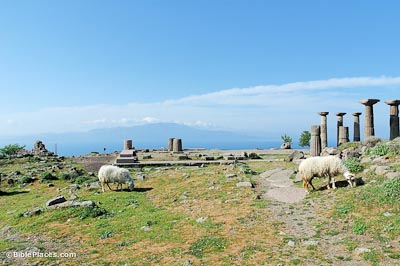 On the 700-foot-high (215-m) acropolis rests the Temple of Athena, made completely of igneous rock called andesite. It bears a mixture of Doric and Ionic styles and dates from 530 BC. Elsewhere on the hill, excavators discovered a gymnasium, a treasury, baths, a theater, a necropolis, and a rectangular agora (marketplace). Also, a Byzantine wall surrounds the acropolis. 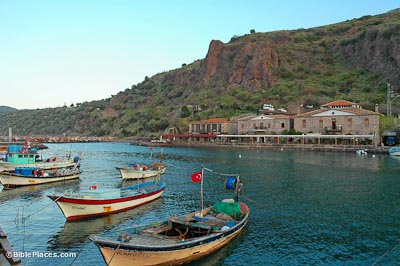 After Paul reached Assos, he and his companions sailed to Mitylene on the island of Lesbos as they traveled to Jerusalem. The harbor from which they sailed has silted over, but inhabitants of the modern city (Behramkale) have constructed their own artificial harbor, today used mostly for fishing.

See also Samos and Miletus. For historical images of fishing, see Life in the Holy Land.

Assos (Behramkale) (Livius). A well-illustrated introduction to the site.

Assos (Behramkale) (Explore Turkey). Focuses primarily on the political history of the city, giving an account of the many conquerors of the region. Also includes a description of the major archaeological features of the site.

Assos (Perseus). Offers a multi-faceted description of the site including physical features, history, excavations, sources, and a wide selection of pictures.

Assos Online Tour (Archaeology Magazine). This article walks through the various structures at the site.

Assos: The main Street and the Agora (Aeternitas Numismatics). Similarly describes some of the main points of interest at Assos, with more pictures.

Behramkale (Assos) (About Turkey). Spotlights the cultural details of the city and its historical contribution to art, science, and learning.

Assos excavations have been going on since 1800s (Hürriet Daily News). A brief discussion of the history of excavations at Assos.