Birthplace of Claudius and Caracalla, home of Irenaeus and 48 martyrs 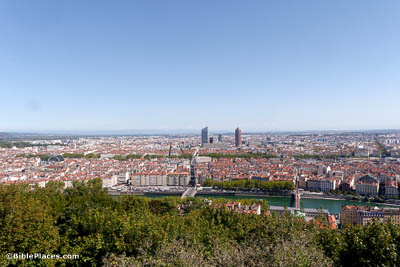 The modern city of Lyon spreads across the area where the Saône and Rhône rivers meet. This area appears to have been occupied since before the Iron Age, and in the Roman period it was known as Lugdunum. After the Romans took control of this region in the 1st century BC, the city of Lugdunum became the capital of the new Roman province. It quickly grew into a major urban center, with heavy river traffic and trade giving it a multicultural character. 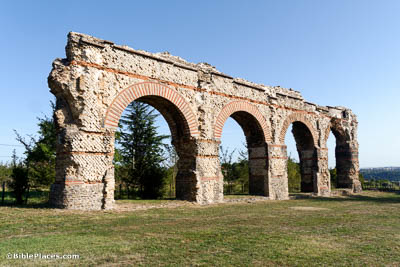 Over Lugdunum’s lifespan, four different aqueducts were constructed, likely in order to accommodate an expanding population. The remains photographed here are a section of the Gier Aqueduct, which is the best-preserved of the four. These standing, above-ground remains of the Gier Aqueduct represent only a relatively small portion of what was a 53-mile (85-km) long system, more than half of which was underground. 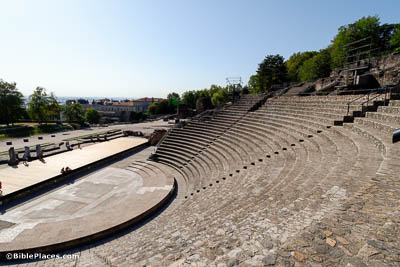 Despite being a Roman theater, this structure was constructed in a style more associated with the Greeks, being built into the side of a slope rather than freestanding. This may be a product of its antiquity, as this theater is the oldest known example in the region, with its first stage dating to the end of the 1st century BC. However, its present state is largely the product of 20th century reconstruction; the original structure was almost completely destroyed by ancient quarrying efforts. 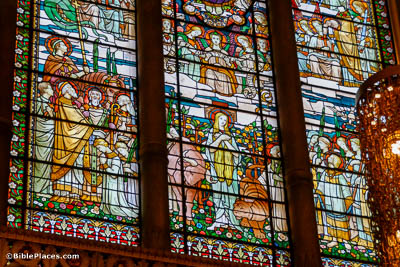 The Martyrs of Lyon

Lyon is considered to be the oldest Christian city in France. The area suffered an intense episode of persecution in AD 177, and it was during this event that Potinus (the first bishop of Lyon) and 47 other saints were martyred. This stained glass window depicts one of these martyrs: a slave girl named Blandina. She is generally depicted with wild beasts, having been thrown to them at the end of her captivity.

The Amphitheater of the Three Gauls

The amphitheater at Lugdunum, the Amphitheater of the Three Gauls, was constructed in AD 19. Its name comes from the structure’s connection to the cult of Rome and Augustus. It was not a particularly large example of an amphitheater in its first stage, with a capacity of not quite 2,000 spectators. (This was expanded to 20,000 in the 2nd century.) This amphitheater is most famous for its association with the AD 177 persecution, as it is thought that at least some of the 48 martyrs were executed here.