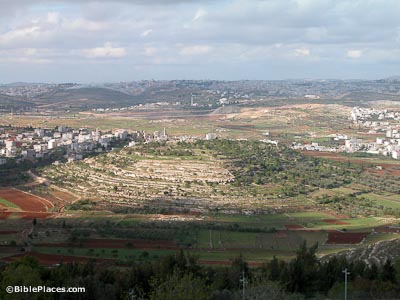 The Arab village of el-Jib sits on the north side of the hill and preserves the biblical name of the city inhabited by the Gibeonites. These people tricked Joshua into making a treaty with them; later the Israelites would be forced to defend their ill-made ally and in the process would defeat a five-king Canaanite coalition. The city of Gibeon sits on the west side of the Central Benjamin Plateau. 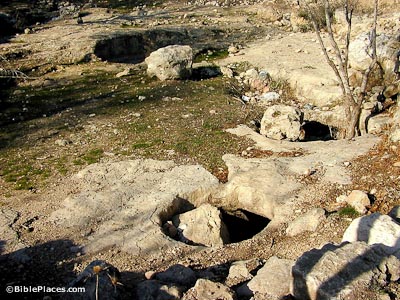 Excavated by James Pritchard 1956–62, Gibeon has significant remains especially from the days of the Israelites. Impressive among these finds are 63 wine cellars from the 8th–7th centuries BC. These cellars were bottle-shaped and about 6 feet (2 m) deep and 6 feet (2 m) in diameter at the bottom. It is estimated that 19,000 gallons (72,000 L) of wine could have been stored in 9-gallon (34-L) jugs in these cellars. 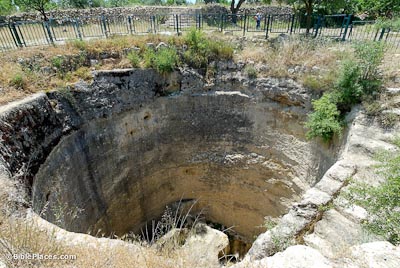 Two water systems have been excavated at Gibeon. The dating of both is difficult and disputed, but both were probably operational in the Iron II period. The stepped tunnel had 93 steps leading to the spring.

The cylindrical shaft is 40 feet (12 m) in diameter and 35 feet (11 m) deep and accessed the water table. Three thousand tons (2,700 t) of limestone were removed by the excavators to reveal the system. 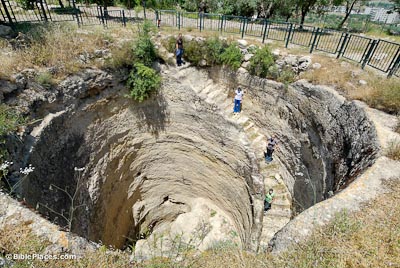 The Pool of Gibeon?

The Bible references the “pool of Gibeon” several times. Apparently this was a prominent landmark in the city. On one occasion a deadly battle between David’s men and Abner’s men took place at this pool (2 Sam 2). Some believe that the cylindrical water shaft is to be identified with this biblical place, while others hold that the shaft was constructed later than the 10th century.

See our page on nearby Nebi Samwil. For a chapter of Scripture related to this site, see Joshua 10.

Gibeon (BibleAtlas) This article gives biblical connections for Gibeon, includes a map, and links to references, along with a full list of Bible occurrences.

Gibeon (ChristianAnswers.net) Lengthy explanation of the biblical significance of the site with multiple internal links to related topics.

Gibeon (Holman Bible Dictionary) A basic overview of the site and its relevance including a map.

The Great Pool at Gibeon (personal blog of Ferrell Jenkins) A simple introduction to the pool.

The Battle at the Pool of Gibeon (Beyond Today) A 1998 article about the discovery of the cistern or pool at the site, including a Bible excerpt and limited archaeological information.

Did the Sun Actually Stand Still in Joshua’s Long Day? (Net Bible Institute)  A lengthy explanation of the possibilities.