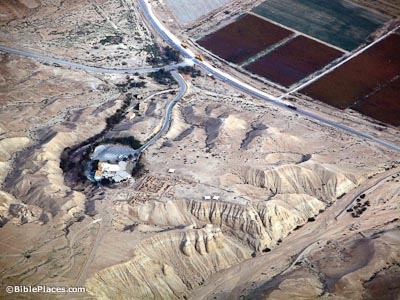 Ten miles (16 km) south of Jericho, Qumran was on a “dead-end street” and provided a perfect location for the isolationist sect of the Essenes to live.

The site was excavated by Catholic priest Roland de Vaux from 1953–56. More recent excavations of the site have taken place under the direction of Hanan Eshel. 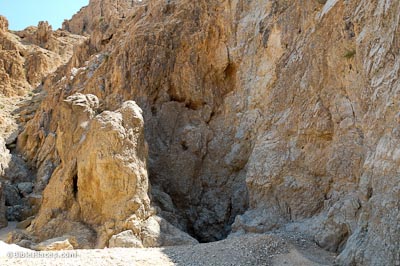 Requiring vast amounts of water for their daily purification rites, the Essenes had to channel the water from the wadi during the infrequent winter storms.

This dam helped to divert the water into an aqueduct which led to the site which in turn had dozens of cisterns, mikvot, and pools. 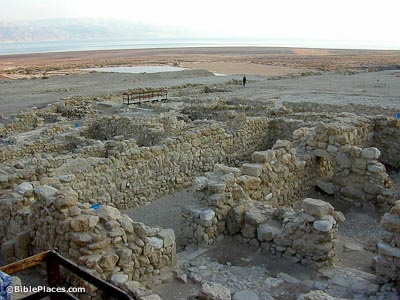 On the basis of inkwells and “writing benches” found in this room, archaeologists have suggested that the second-story room of this building was the place where scrolls were copied.

No scrolls were found in this room or in the ruins of the site itself. But the same type of unique pottery was found both on-site and in the caves with the scrolls, helping to connect the two. 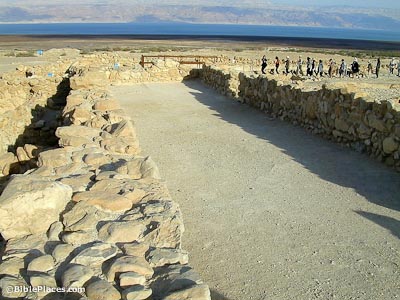 This long room was used for communal meals. Three rows of tables were apparently in place where the Qumranites ate in silence.

In the next room over, more than 1,000 complete vessels were found including 708 cups, 210 plates, and 108 salad bowls. All of these were serving vessels as they were never fired. 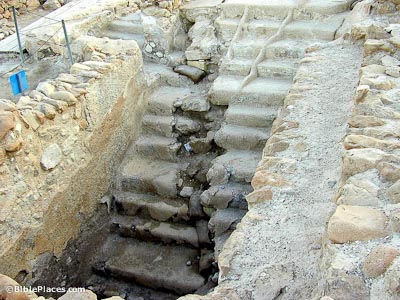 Numerous mikvot (ritual purity baths) were in use at the site for this community that practiced immersion twice daily.

This mikvah evidences the site’s destruction by earthquake in 31 BC. The crack shifted the left side of the mikvah by nearly 12 inches (30 cm). 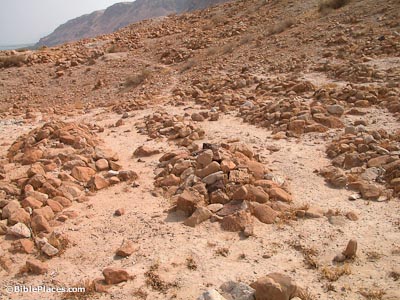 The presence of female burials in what has been regarded as a celibate male community has been a mystery. Joe Zias determined that the female burials were more recent interments of Bedouin.

See Qumran Caves at BiblePlaces.com for a tour of the places the scrolls were discovered. See also the related sites of the Dead Sea, En Gedi, Masada, Jericho, and the Judean Wilderness.

Qumran (Jewish Virtual Library) An excellent introduction to the site, including some background on the Essenes.

Who Were the Essenes? (Bible History Daily, Jewish Ideas Daily) An introduction to the Essenes.

Artifacts from the Qumran Site (Library of Congress) Wonderful descriptions and photos of archaeological discoveries at Qumran.

The Dead Sea Scrolls and the New Testament (Bible History Daily) How do the DSS connect with the New Testament? Do they talk about Jesus? What about His world? This article talks about these things.

The Orion Center for the Study of the Dead Sea Scrolls (Hebrew University, Jerusalem) The site for extensive research on the scrolls. Includes publications, other resources, and a “virtual Qumran tour.”

Shrine of the Book (Israel Museum) A nice explanation of the scrolls including rather extensive information on the Aleppo Codex and links to exploring the scrolls online.


Qumran (The Israeli Mosaic) Contains informative sections on the ruins of Qumran, the Dead Sea Scrolls, and the Dead Sea sect. Links throughout allow for in-depth study.

Qumran (Into His Own) A brief, encyclopedia-type article with multiple links to related words and topics for further study.

Qumran: A Day in the Life (tusculum.edu) A fictional story, written about a man whose name was actually mentioned in one of the scrolls, based on details of daily life taken from the scrolls and other relevant sources.

Qumran (Donald D. Binder, SMU) An article focusing on the dwellings of the community at Qumran, including a few images.

In the Qumran Cliffs, an Expedition Digs Up New Dead Sea Scroll Caves (Times of Israel) This 2019 article is accompanied by several videos and discusses some of the most recent finds at the site.

The Qumran Quandry (Jerusalem Post) This article leaves something to be desired in formatting and illustration, but the information is quite interesting and extensive for those interested. Written in 2008, it discusses the academic debate about the presence of women and children, along with other interesting aspects of Qumran.