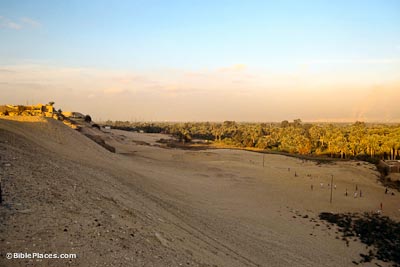 The 5th century BC Greek historian Herodotus declared that Egypt is the “gift of the Nile.” He simply stated what all have always known to be true: without the Nile, there is no Egypt. Where the Nile overflows its banks, the land is green, and where the water’s influence stops, the desert begins. The rainfall south of Cairo averages 1 1/2 inches (4 cm) per year, and often there is no rain at all during the year. Apart from a few western oases, Egypt is a desert, and only 3% of the land (that which is along the Nile River) can be cultivated. Ninety-nine percent of the population of Egypt today lives in the Nile River Valley. 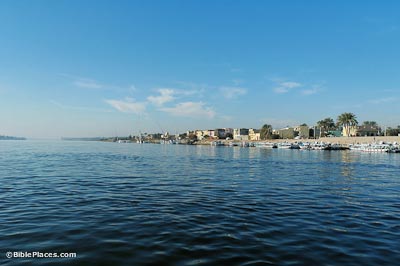 Origin of the River

The Nile begins in the area of Urundi and flows through Uganda into Sudan. The river has two branches (White and Blue), and its total length is about 4,000 miles (6,670 km). Only 900 miles (1,448km) of the river is in the modern country of Egypt. The two branches join just north of the modern city of Khartoum, Sudan. 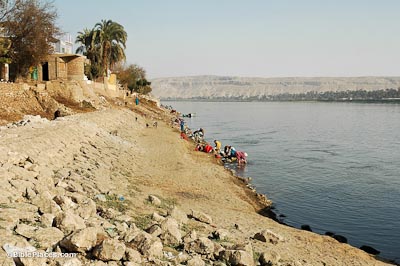 The Nile River was a united system in Egypt. Perhaps for this reason, the ancient Egyptians did not have a name for this river. The Egyptians simply called the Nile “al-taru,” which is the Egyptian word for river. In their world, there was only one river. It is still uncertain where the ancient Greeks got the word “Nilus,” from which we get the word “Nile.” 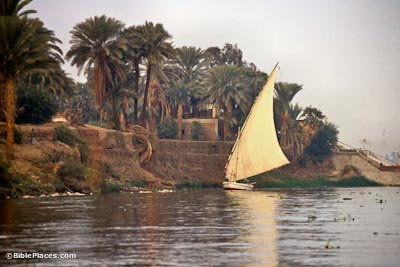 Travel on the Nile

Almost all travel in ancient Egypt was by boat. If the journey required desert travel, then the caravan was the transportation of choice. Because the Egyptians only knew of boat travel, they had no neutral word for “to travel.” 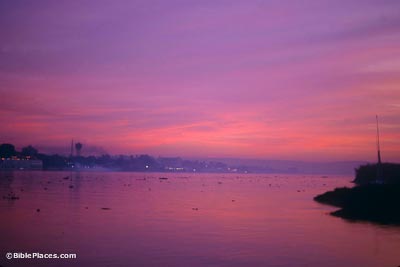 The annual inundation was the most significant event in the life of the ancient Egyptian. In fact, the calendar revolved around this four-month event. There were three seasons in ancient Egypt, each consisting of four months. The Inundation Period was from September to January, the Growing Period lasted from Feb-May, and the Drought Season lasted from June to September. The inundation covered the valley floor with a thick layer of wet silt. This fertile soil was excellent for planting. “The land will rise like the Nile; it will be stirred up and then sink like the river of Egypt” (Amos 8:7). 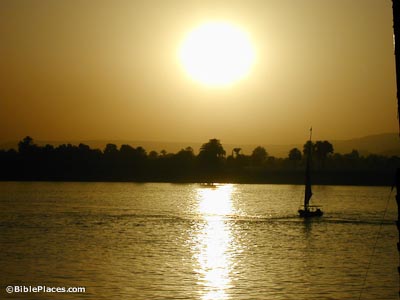 The height to which the river would rise was important for agriculture, and Nilometers were built in the earliest times to measure the level of the river during the height of the inundation. Several Nilometers from different periods can be seen today at Elephantine Island (Aswan). If the river did not rise enough, there would be less area available for planting that year. If the river rose too high, villages might be flooded. Since the construction of the High Dam in Aswan (completed in 1971), the Nile no longer overflows its banks each year.

For historical images of the Nile, the Nile at flood stage, and water in Egypt, see Life in the Holy Land.

The Nile River (Think Quest). Excellent resource providing information on a variety of topics related to the Nile, including its climate, flooding, irrigation, dams, and navigation.

The Nile (LookLex). Informative encyclopedia article on the Nile, describing its geography, culture, and history.

The course of the River Nile (Nile Basin Initiative). Good introduction to the Nile River. Describes the various sections of the Nile including the White Nile and the Blue Nile.

The Nile River (Personal Webpage). Provides general information about the Nile, a few maps and charts, and a some pictures.

Hymn to the Nile (Internet Ancient History Sourcebook). A copy of an ancient hymn that dates to c. 2100 BC.

How the Nile River Works (How Stuff Works). Half a dozen informative pages about the length of the river, its flooding, various dangers, as well as some photos and a bibliography.

The Blue Nile River Paddling Adventure (MarkTanner.com). The author and his partner were the first people to paddle the length of the Blue Nile River to the Mediterranean Sea. His website describes their harrowing adventures and gives excerpts from his book manuscript. The site also includes the “Top Ten Must-Sees” on the Nile along with a challenging trivia quiz.