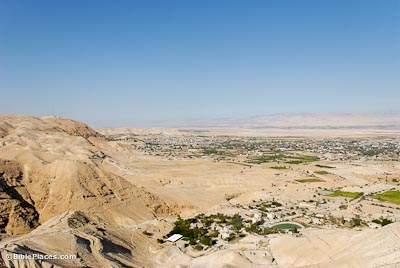 The Old Testament site of Tell es-Sultan is in the distance and is the city Joshua destroyed.  In Jesus’s day, a new center had been constructed on the wadi banks in the foreground by the Hasmonean rulers and Herod the Great. 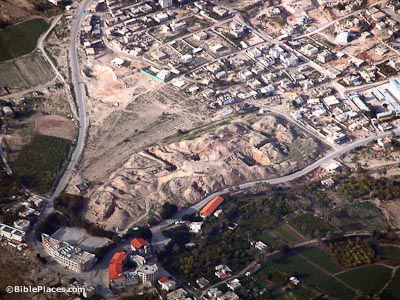 After Jerusalem, Jericho is the most excavated site in Israel.  Charles Warren in 1868 sank several shafts but concluded that nothing was to be found (he missed the Neolithic tower by a meter!).  Germans Sellin and Watzinger excavated 1907–13, Garstang 1930–36, and Kenyon 1952–58.  An Italian-Palestinian team excavated for several years beginning in 1997. 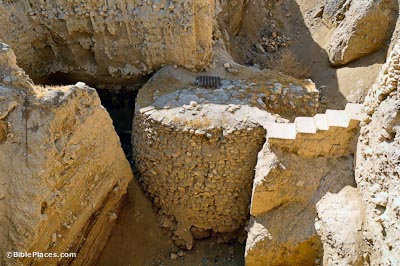 Discovered and excavated by Kathleen Kenyon in her Trench I, the Neolithic tower was built and destroyed in Pre-Pottery Neolithic A, which Kenyon dated to 8000–7000 BC.  The 26-foot (8-m) diameter tower stood 26 feet (8 m) tall and was connected on the inside of a 13-foot (4-m) thick wall.

Based on this discovery, archaeologists have claimed that Jericho is the “oldest city in the world.”  Clearly, such monumental construction reflects social organization and central authority, but there are good reasons to question both its dating to the 8th millennium BC and its function as a defensive fortification. 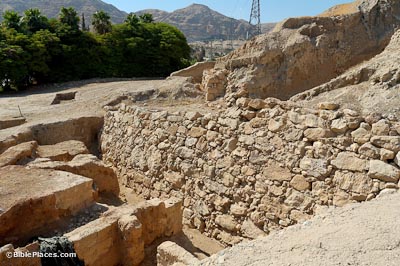 From the excavations of Sellin and Watzinger, archaeologists have recognized the existence of a large revetment wall that supported the slope of the tell in the Middle Bronze Age.

This revetment wall was composed of large Cyclopean stones and supported a mudbrick wall above it.  This southern portion of the wall was exposed in 1997. 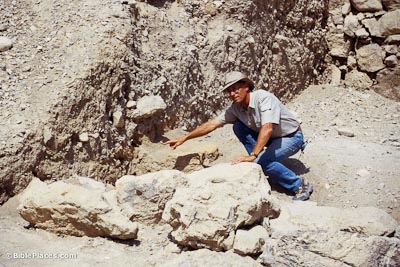 Sellin and Watzinger and later Kenyon found remains of a collapsed mudbrick wall at the base of the stone revetment wall.

Bryant Wood points to the base of that mudbrick wall.  All agree that the wall fell down, but they differ on the date.  Wood’s conclusions are the most informed; he dates the destruction of the wall to the time of Joshua (1400 BC). 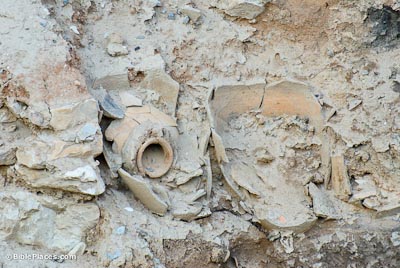 Both Garstang and Kenyon found dozens of store jars full of grain from the last Canaanite city of Jericho.  The obvious conclusion: these were from the time of the harvest when the city was burned (not looted) by Joshua.  As such, the archaeological record fits the biblical record at this point precisely.

The store jars pictured here still remain in one of Kenyon’s balks at Jericho. 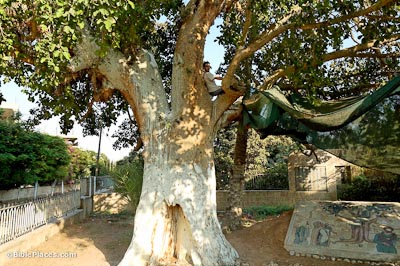 “Jesus entered Jericho and was passing through it. Now a man named Zacchaeus was there; he was a chief tax collector and was rich. He was trying to get a look at Jesus, but being a short man he could not see over the crowd. So he ran on ahead and climbed up into a sycamore tree to see him, because Jesus was going to pass that way” (Luke 19:1-4, NET Bible).

At BiblePlaces.com, see the related sites of the Dead Sea, En Gedi, Masada, Qumran, Qumran Caves, and the Judean Wilderness.

Visiting Jericho (personal travel blog) A narrative of impressions and highlights, including the ascent to the Mount of Temptation. Gives some fun cultural interactions, and includes basic photos.

Jericho (Into His Own) A brief, encyclopedia-type article with multiple links to related words and topics for further study.

The walls of Jericho: Archaeology confirms they really did come a-tumblin’ down (Answers in Genesis Ministries) This article by Bryant Wood presents a alternate interpretation of the archaeological findings at Jericho. Illustrations serve to clarify his position.

Jericho by Don Jaques (Biblical Chronologist) An article by Wood responding to Bienkowski.

Jericho (Mysteries of the Bible) A series of lectures by Michael Sanders.  (Note: Jericho is covered in parts 8–12 & 14.)

The Saga Of Ancient Jericho (ChristianCourier.com) “A study of Joshua’s great victory over the ancient city of Jericho” (their page description).

Tell es-Sultan (PDF chapter) This chapter is a 30+ page discussion of Jericho’s archaeology, including numerous sketches and old photographs.

Archaeology in Israel – Jericho (The Jewish Magazine) A re-telling of the history of the site with a personal flavor. Describes many sites in Jericho, not limited to the tel.

Kathleen Kenyon and Jericho (Bible Odyssey) A sketch of the archaeologist whose fame began with her work at Jericho.

Monastery of St. George (See the Holy Land) A fascinating monastery to visit in the cliffs overlooking Jericho; this article gives history and photos.