One mile due west of traditional Ai (et-Tell) is Kh. el-Maqatir, an alternate location for Ai. Its location fits the approximate area one would expect to find the city that Joshua destroyed in the Conquest. Furthermore, the absence of any evidence of inhabitation at et-Tell should compel the honest historian to look elsewhere for Ai.

If Kh. el-Maqatir were to prove to be Ai archaeologically, its location fits the biblical record well. The deep Wadi Sheban to the west provides a perfect location for the ambush forces of the Israelites to hide. Joshua’s command post was on the hill just east (left) of the modern road and he fled east away from the wadi allowing the ambush force to attack from behind. 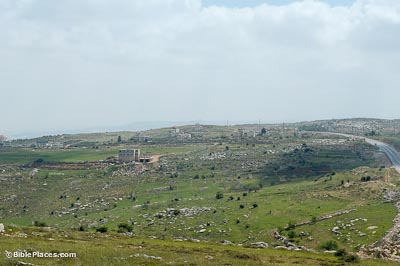 Separated from the north by a deep valley, Khirbet el-Maqatir is here seen from the eyes of Joshua at his camp before attacking the city. To date, much evidence has been found indicating that Kh. el-Maqatir is the Ai of Joshua’s day, including the city fortifications, gate, evidence of battle and destruction by fire. 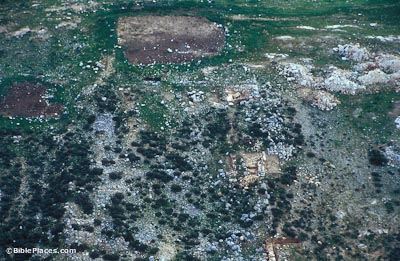 Byzantine monks built a large monastery on the site in the 4th c. A.D. that may help in the identification of this site as Ai. The earliest reports by Edward Robinson in 1838 show that the local peoples thought Kh. el-Maqatir was Ai and it is possible that this church preserved the memory of this identification.

Biblical Sites: The Lost City of Ai…Found (Biblical Archaeology Report) A 2019 article walking through the evidence that points to Khirbet el-Maqatir as Ai, including a reconstruction of the city and a nice reference list.

The Problem of Ai Solved (The Bible Seminary) A detailed discussion, concluding that el-Maqatir is the best site for Ai.

Excavations at Kh. el-Maqatir 1995–2000, 2009–2013: A Border Fortress in the Highlands of Canaan and a Proposed New Location for the Ai of Joshua 7–8 (PDF paper) Photos, a map, and many recreation sketches relating to Khirbet el-Maqatir by Dr. Bryant Wood, leader of excavations at the site.

Biblical City of Ai Located (Patterns of Evidence) Includes a map that shows both this site and et-Tell, along with an evaluation of biblical and archaeological evidence.

Getting Archaeology Right at Ai (Answers in Genesis) Gives seven specific reasons to believe Khirbet el-Maqatir is the biblical site of Ai.

The Biblical Ai – Khirbet el-Maqatir (Holy Land Site) Features some YouTube videos on the topic, a few photos, and some basic information.