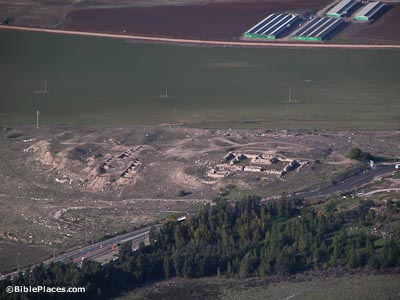 A border city between Judah and Dan, Beth Shemesh was given to the Levites. Beth Shemesh was the most important Israelite city in the Sorek Valley as it watched both east-west traffic through the Sorek Valley and north-south traffic along the “Diagonal Route.” Recent excavations have shown a thriving city here from the Middle Bronze Age through the Iron II period (circa 2200–586 BC).

On the north side of the Sorek Valley, across from Beth Shemesh, are the ancient villages of Zorah (top of ridge, center) and Eshtaol (off picture to the right). Samson’s prophesied birth was in this area (Judg 13) as was the location of his burial (Judg 16). Samson’s first “girlfriend” lived at Timnah a few miles west in the Sorek Valley. His last girlfriend, Delilah, lived somewhere in this same valley. 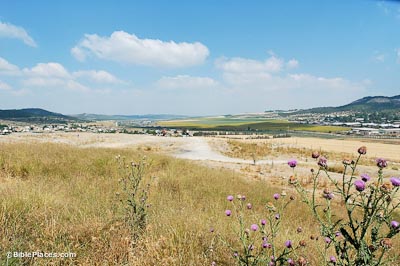 Excavations of Beth Shemesh are visible in the foreground and the Sorek Valley to the west is behind. Samson traveled down this valley numerous times, including the time when he killed the lion and later when he tied the tails of 300 foxes together.

This was the vantage point of the Israelites who watched the Ark of the Covenant return to Beth Shemesh on a cow-pulled cart from the land of the Philistines (1 Sam 6). 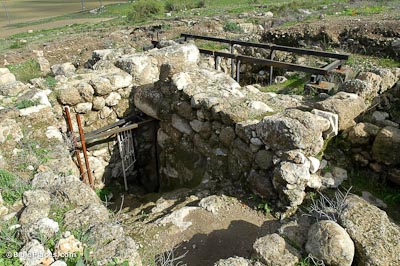 Israeli archaeologists recently uncovered the largest Iron Age reservoir known in Israel. With a capacity of 7,500 cubic feet (210 m3), this reservoir could have supplied the town’s inhabitants with water to survive a three-month siege. This underground storage basin is composed of two long rooms in the shape of a cross and according to the excavators is “one of the finest examples of water engineering and management in the kingdom of Judah.” 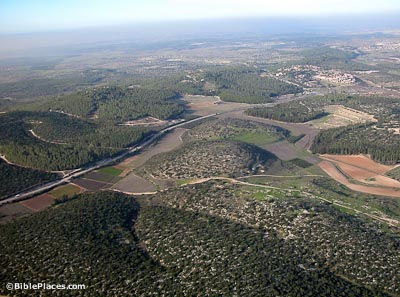 The importance of Beth Shemesh is largely owing to its situation along the route leading south to Lachish. Known by some as the “Diagonal Route” (no name is given in historical sources), this route was the major artery through the Shephelah in the historical periods. Travelers going south from Beth Shemesh will meet most of the major cities of the Shephelah along this route: Azekah, Moresheth Gath, Mareshah/Beth Guvrin and Lachish.

Tel Beth Shemesh (BibleWalks) A detailed and illustrated look at the biblical site.

Beth-Shemesh: A Biblical Border City Between Judah and Philistia (Tel Aviv University) Contains background information as well as archaeological findings from the period of the Judges, the United Monarchy, and the Kingdom of Judah.  The excavated Underground Water Reservoir and Iron-Smith Workshop are highlighted.

In Beit Shemesh, New Highway Collides with Surprise Biblical-Era Settlement (Times of Israel) This 2019 article discusses some of the ongoing discoveries at the site, illustrated with several nice images of the site, archaeological finds there, and the highway.

Temple and Stone Table Discovered at Beit Shemesh (Associates for Biblical Research) A brief article, with external links, regarding the 2019 discovery of an ancient temple that had been deliberately destroyed, along with a rock where it is hypothesized that the Ark of the Covenant once rested (cf. 1 Sam 6:14). No photos.

Five Places Where Samson Walked (Israel Institute of Biblical Studies) Illustrated with several images, this article shows five places associated with Samson. It does not include Beth Shemesh, but does include Zorah and Timnah, along with others.